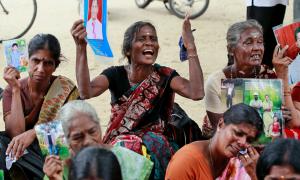 "Instead of Holding Perpetrators to Account, the Resolution White Washes Their Atrocity Crimes and Bail Them Out"

"We are extremely disappointed with the Resolution, which bails out Sri Lankan security forces and the political leadership who committed War Crimes, Crimes Against Humanity, and Genocide against Tamil people thirteen years ago" said families of the disappeared and other victims groups.

"Instead of holding perpetrators to account, the Resolution white washes their atrocity crimes."

The call to Refer sri Lanka to ICC was also strongly endorsed by the Victim groups, Tamil political parties, Members of Parliament and Civil Society, saying this is the only way to get justice for mass atrocities committed against the Tamil people by the Sri Lankan Security forces and political leaders.

"Given our devastating experience, we are seriously worried that the current Resolution will embolden extremely large number of troops stationed in Tamil areas to commit mass atrocities against Tamils without any hesitation, knowing well that they will not be held accountable. These are the same troops who killed thousands of Tamils and sexually assaulted and raped hundreds of Tamil women and girls." said the groups.

"According to UN’s Internal Review Report on Sri Lanka, around 70 thousand Tamils were killed or unaccounted for during the final six months of the war. International Truth and Justice Project in February 2017 handed over details to UN of Sri Lankan Military run "Rape Camps", where Tamil women are being held as “sex slaves”. Furthermore, Thousands of Tamils had disappeared, including babies and children."

Despite appeals by senior UN officials as well as various segments of the Tamil community who paid the devastating price, the Resolution that was tabled ignores not only the call to Refer Sri Lanka to ICC, but also chose to ignore the pain, suffering and trauma of the victims, said the groups.

Families of the Disappeared
FD
email us here

Issuance Expands Into the Canadian…

The Most Reliable Source for…