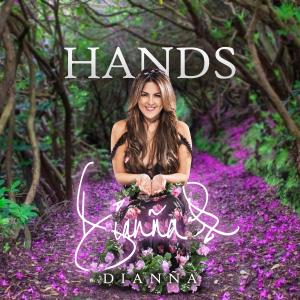 When I look at someone’s hands I can often see the life they have lived like a storybook written in their hands.”
— Dianña
LOS ANGELES, CALIFORNIA, USA, August 1, 2022 /EINPresswire.com/ -- Dianña was inspired to write her newest single “Hands” when she put her own hand on top of an older working man’s hand and was struck by the contrast. “I could just see the type of life he had led by looking at the scars and texture in his hands” Dianña said. In her own distinctive “Dianña Country” style her vocals seamlessly transition from muted to forceful to accentuate the narrative of Hands.

Hands comes on the heels of Dianña’s previous release, “Gonna Take a Real Strong Man,” which offers a poignant look back at some of the events that have shaped her life. She also hit the charts in 2022 with a novelty song, “Calm Down Karen,” which was played more than 50 million times on TikTok and led to a remix that peaked at #48 on the BDS/Billboard Top 40 Pop Indicator chart.

Dianña (dee-ON-ya) found her true calling as a country singer/songwriter after having written, recorded, and performed with many well-known R&B, rap, rock, pop, gospel, alternative, and country artists from Snoop Dogg to Amy Grant. Her debut country single, “Andale Yeehaw,” was released in late 2018.

Check out “Hands” on Spotify here: https://open.spotify.com/artist/20NnRfrCe5FZXWL84lxVzz
Check out "Hands on SoundCloud here: https://soundcloud.com/diannacountry/hands
Connect with Dianña on all her social media and streaming platforms via her Linktr.ee: https://linktr.ee/diannacountry