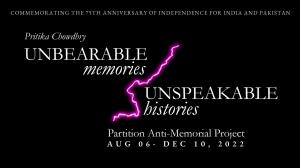 Unbearable Memories, Unspeakable Histories, art exhibition by Pritika Chowdhry, commemorating the 75th anniversary of the Partition of India and Pakistan. 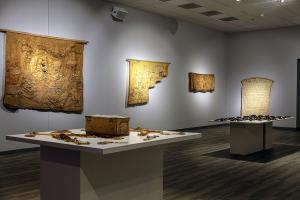 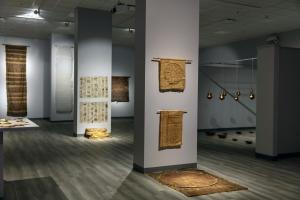 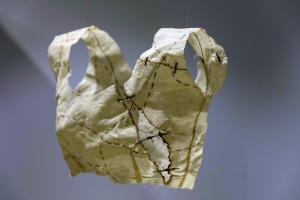 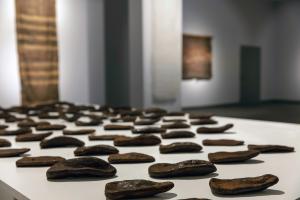 Pritika Chowdhry memorializes the 1947 Partition of India and Pakistan through art installations that educate and evoke empathetic responses in viewers.

A defining moment that has neither beginning nor end, Partition continues to influence how the peoples and states of postcolonial South Asia envisage their past, present and future.”
— Ayesha Jalal
CHICAGO, IL, UNITED STATES, August 10, 2022 /EINPresswire.com/ -- 15th August 2022 marks the 75th anniversary of the Partition of the Indian subcontinent and the emergence of India and Pakistan as independent nation-states. South Asia Institute commemorates this historic event and addresses its many facets, with its upcoming exhibition, "Unbearable Memories, Unspeakable Histories: Partition Anti-Memorial Project," on view Saturday, August 6, through Saturday, December 10, 2022. The exhibition’s title, alludes to the painful and silenced narratives that have been omitted from mainstream discourses of the 1947 Partition of India.

India's independence from colonial rule in 1947 is forever linked with its ghostly twin, the Partition. Pritika Chowdhry’s exhibition investigates the Partition of India in 1947, which created Pakistan, and eventually, Bangladesh in 1971. The Partition is central to modern identity and geopolitics in South Asia. It triggered the largest, most rapid migration in human history and is often compared to the Holocaust. Over 20 million people were displaced in an unprecedented mass migration. Approximately 2 million people died in the communal violence across the new border, called the Radcliffe Line.

Partition Anti-Memorial Project founded on the 60th anniversary of the Partition in 2007, is Chowdhry’s ongoing research-based project that excavates subjugated knowledge about the 1947 Partition of India and the 1971 Bangladesh Liberation War to build several experiential art installations that are temporary anti-memorials to the Partition.

The Partition has been described by acclaimed Pakistani-American historian Ayesha Jalal as “the central historical event in twentieth century South Asia.” In her words, “A defining moment that has neither beginning nor end, partition continues to influence how the peoples and states of postcolonial South Asia envisage their past, present and future.”

Over the last fifteen years, Pritika Chowdhry has created ten bodies of work that address and examine the many facets of the Partition of India from a counter-memory perspective. Her anti-memorials create alternate ways to remember and memorialize traumatic geopolitical events, from the dual lenses of South Asian diasporic postmemory. “Pritika Chowdhry’s artwork is a powder keg of emotionality, raw talent, and visceral grit! I have never met a more thoughtful, theoretically engaged artist-scholar-educator-activist. Counter-Memory Project is the stuff of truth-telling, trauma-healing, and narrative-forging!" remarks Jacque Micieli-Voutsinas, PhD, Assistant Professor Museum Studies, University of Florida, Gainesville.

Evoking corporeal bodies through a myriad of materials, the exhibition highlights generational resilience and resistance. To commemorate the 75th anniversary of the Partition, several of the artist’s works will be featured in a solo retrospective exhibition at the South Asia Institute in Chicago from August 06 to December 10 2022.

Pritika Chowdhry is a feminist and postcolonial artist and curator, whose work is in both public and private collections. Through large-scale sculptures and site-sensitive installations that reference the body, her work memorializes unbearable memories. Having witnessed the intergenerational effects of geopolitical trauma, Chowdhry has dedicated her artistic practice to cataloging the violence of colonialism/imperialism alongside global acts of resistance.
Through her anti-memorials, Chowdhry aims to highlight historically marginalized female voices in the representation of Partition while contextualizing the event’s global repercussions. Transnational in scope, her sculptural art installations and anti-memorials bear witness to partitions of countries, civil and military wars, riots, border violence, genocides, and terrorist attacks, holding space for mourning, remembrance, and repair. ​

Read more about Pritika Chowdhry in an interview for our ongoing digital interview series SAIatHome. www.saichicago.org/sai-at-home/pritika-chowdhry, and learn more about her Partition Anti-Memorial Project at https://www.pritikachowdhry.com/partition-art.