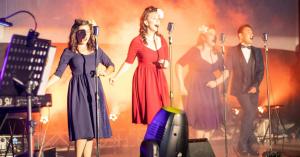 The jazz vocal group performing on the main stage

Swing the night away at the Automobile Driving Museum in El Segundo for a live show featuring The Swing Tones, our LIve Band, Food, Vendors, Dance Classes+

We are keeping high quality musical experiences, interactive dance concerts of a former era, alive. For mr, SSN is the flagship show and a chance to highlight our Swing Tones sound, unadulterated.”
— Aaron Jacobs

Summer Swing Nights is back for the 2022 summer season and announced new event dates for August 12, 13 and 14. Now in its fifth year, this “swingafied” music series features a seven-piece band, swing dancing and The Swing Tones. The Swing Tones bring you back to the days of vocal jazz by blending big band sounds and nostalgic tunes of the swing era, with tight vocal harmonies and postmodern twists.

Executive Producer and founder Aaron Jacobs says this is the ultimate big band experience accessible for all generations of people in Southern California. “We are keeping high quality musical experiences, interactive dance concerts of a former era, alive,” Jacobs said. “For me, SSN is the flagship show and a chance to highlight our Swing Tones sound, unadulterated.”

Marisol Rios, Executive Director of The Zimmerman Automobile Driving Museum says, “The Zimmerman has been a proud supporter of Summer Swing Nights since its inception in 2018. The big band and dancing has brought musical history to our museum, which is mostly American vehicles, perfectly for the era portrayed throughout the concert! The visitors who come for the show are always delighted to have such a beautiful backdrop and we are always ecstatic to hear swing music surround these historical vehicles. We look forward to continuing to support Summer Swing Nights!”

When the COVID-19 pandemic hit in 2020, musical performances came to a halt, but not for Jacobs or The Swing Tones. Jacobs says the experience was difficult but with assistance from the ADM and LA Swing Dance Posse, the team produced several drive-in shows all outdoors. Now that vaccines are easily available and mask mandates have lifted across Southern California, The Swing Tones are back and better than ever. “It’s been amazing,” Jacobs says. “It's what we've been missing from our lives during the big quarantine. Nothing beats the live music experience, sans auto-tune and synthesized sounds.”

Also featured on NBC4’s California Live and KPFK’s Soul Rebel Radio on NPR
MORE ABOUT THE SWING TONES: The Swing Tones debuted at Summer Swing Nights in 2018 at The Automobile Driving Museum in El Segundo with a mission to preserve the legacies of big band and swing music while contemporizing the experience with some modern twists. Highlighting vocal harmonic sounds such as “The Andrews Sisters” and “The Manhattan Transfer,” The Swing Tones also take modern tunes and "swingify" them, similar to the popular Postmodern Jukebox.

MORE ABOUT THE ZIMMERMAN AUTOMOBILE DRIVING MUSEUM: Founded in 2002, The Automobile Driving Museum is an antique car museum in the industrial zone of El Segundo that focuses on the history of the American automobile. Its mission is to "collect, preserve, exhibit and ride in historic vehicles." The museum offers classes, car shows, and rides to their guests in their extensive collection of over 130 antique and collector vehicles!

MORE ABOUT LA SWING DANCE POSSE: LASDP is a non-profit organization formed to honor contributions African Americans have made to vernacular jazz dance through performance and education. They teach the history of those styles, ranging from the 1800's to the present. This lends the opportunity to fill in knowledge gaps of Swing dance history, a history that has deep roots in Black culture. Our mission is to educate, preserve, promote, teach and perform the vernacular jazz dances such as Savoy Swing, Charleston, and Lindy Hop dance.

“One of the biggest highlights for LA Swing Dance Posse is performing with the Aaron Jacobs Productions at the Automobile Museum of El Segundo. The music, dancing vintage cars and great food. We enjoy being a part of the fund raiser. Thank you Aaron Jacobs and look forward to a great show”
– Arthur White, President, LASDP Foudations

Reducing the Wait for Digital…

CTV Maintains Lead For Most…

One Of A Kind Alternative…