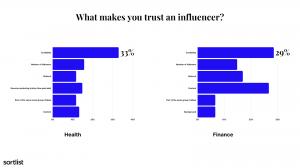 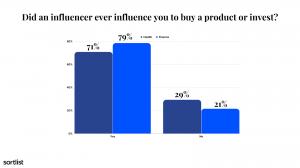 LONDON, UNITED KINGDOM, August 4, 2022 /EINPresswire.com/ -- August 2022 - Do people trust influencers more than their bankers or doctors? Sortlist, the B2B matchmaking platform, surveyed 1,000 users across Belgium, Germany, Spain, France, and the Netherlands who followed health and nutrition influencers, as well as finance and wealth influencers, in order to understand the power of influencers on people’s decisions and where that leaves specialists.

- 1 out of every 5 users trusts influencers more than their doctors and financial advisors.
- 46% of respondents said that influencers helped them in their financial investments; however, 37% think specialists are more transparent.
- 68% of people following finance influencers research the information they provide, as do 50% of the people following health influencers.
- Cost and the difficulty to get an appointment are the two main blockers that users face when deciding to contact their health or wealth specialists.
- In both industries, transparency is the key trait that sets specialists apart from influencers.
- Despite the influence they have, influencers are still ranked last when users were asked who they would trust more. Specialists ranked first.
- Additionally, it reveals that people that are 35-44 years old are the group least influenced to buy a health or nutritional product promoted by influencers on social media, while the older users (45-54 years old) were the most influenced to do so.

You can read the full study here: https://www.sortlist.com/blog/the-power-of-influencers/


About Sortlist
Sortlist is Europe's largest B2B marketplace in the marketing industry. The company was founded in 2014 in Belgium as a startup to connect companies with marketing and creative agencies that fit their needs. Today, Sortlist has offices in seven countries.