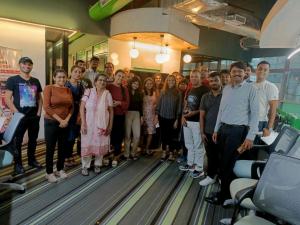 Cover of the white paper on millets

Through a data driven research by its Global Poverty Elimination Lab, Sapio Analytics has zeroed down on millets and climate as focus areas for India's growth

MUMBAI, MAHARASHTRA, INDIA, August 13, 2022 /EINPresswire.com/ -- Government advisory firm Sapio Analytics, through its subsidiary Global Poverty Elimination Lab, focuses on identifying areas that need to be in focus to promote development. As part of its data driven research on the same, it has identified production of millet based products as being an important element in India's agricultural growth. It has also identified climate change to be an area that can help India generate significant revenues for local development.

Recently, the company hosted a meet-up of millet lovers at its Mumbai headquarters. It announced at the meet-up the creation of an ecosystem promoting millets powered by a millet intelligence platform it is in the process of creating. Its white paper titled "Poor Man's Rich Food" was also released at the event. The paper speaks about how millet based economy shall help in combating climate change, increasing food security, and improving farmer welfare. Co-author of the paper Jagadesh C was also present at the event.

Speaking at the event organised by Mitti ke Rang and Gran's Goodness, Darshan Raval, representative of Sapio Analytics, also spoke about its partnership with a global market research agency and its potential association with global food organisations, in driving up the supply and demand of millet based products. The event saw participation from startups engaged in millet based products, nutritionists, and enthusiasts. The organisers are planning to do more such meet-ups and drive demand for millet.

Sapio Analytics has also forayed into making India's cities net zero, and use the concept to generate income for the municipal corporations by engaging in carbon trading. It aims to make this announcement soon. Global Poverty Elimination Lab by Sapio Analytics is based on an open-source concept of using districts as a lab towards solving its problems and creating scalable businesses in the process. Climate change and millets have been identified as opportunities that can be used towards transformational consulting for district administrations.

In an opinion article published on the 10th of August in India's leading newspaper Hindustan Times, Manoj Kumar Mishra, Secretary, Electronics and Information Technology, Government of Odisha, also mentioned climate change and millets as picks for the progress of Odisha. This marks the possibility of a policy-level shift at different levels of governments in India.