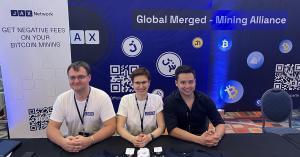 Jax.Network and Syscoin presented the GMMA on Mining Disrupt 2022

Merged mining is a win-win solution for Bitcoin miners and the crypto community. It is an easy way to increase the security and obtain extra block rewards and transaction fees of the child chain,”
— Vinod Manoharan, Founder of Jax.Network

Jax.Network already participated in Mining Disrupt last year and this time returned to Miami with a fully operational network ready to welcome up to 100% of Bitcoin hashrate. The company had a lot of aces up its sleeve offering exclusive benefits, including extra block rewards, exclusive mining pool fees, and mining assistance. It’s also worth mentioning that Jax.Network’s Chief Scientist joined the panel discussion focused on the Proof-of-Work consensus algorithm and was received warmly by the audience.

As reported earlier, Jax.Network established the Global Merged Mining Alliance (GMMA) with Syscoin indeed became the talk of the conference. The Jax.Network booth co-hosted with Syscoin became one of the liveliest spots on the expo, as many attendees came asking questions regarding merged mining, the GMMA, and other blockchain-related things. The alliance was also presented on stage, detailing the advantages of merge-mining Bitcoin with Jax.Network, including 0% hashrate loss, no increased costs, and relatively high block rewards. The team’s main objective for the conference was to spread awareness of merged mining and increase the hashrate for its network.

“Merged mining is a win-win solution for Bitcoin miners and the crypto community at large. It is an easy way to increase the security of both networks and obtain higher revenue in the form of extra block rewards and transaction fees of the child chain. We believe that we managed to convert as many conference participants as possible to try out merge-mining Bitcoin with our network,” Vinod Manoharan, Founder of Jax.Network commented on the matter.

Missouri: The City of St.…