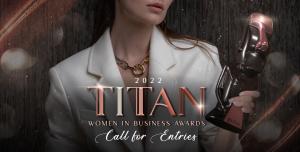 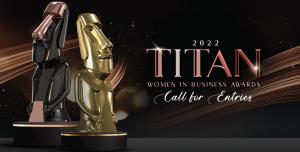 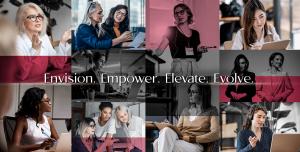 The TITAN Awards was meant for female individuals from all sectors to proclaim their remarkable contributions, while further admiring female attainments in creating history that transcends industries.”
— Thomas Brandt, Spokesperson of IAA

NEW YORK, NY, UNITED STATES, August 2, 2022 /EINPresswire.com/ -- In the grand progression of 2022, the International Awards Associate (IAA) pridefully reveals a thoughtfully prepared addition to TITAN – the TITAN Women In Business Awards, an official medium to celebrate widespread recognition of females in business fields, and their visions life-enhancing alternatives that will create a world of grandeur. “We have made thorough preparations in the commencement of an all-encompassing competition to promote women achievements in business,” exclaimed Thomas Brandt, the esteemed spokesperson of IAA. “The TITAN Awards was meant for female individuals from all sectors to proclaim their remarkable contributions, while further admiring female attainments in creating history that transcends industries.”

The awards is fully open to all female entrepreneurs, executives, leaders, female-led teams, departments and organizations associated with the business field all across the world. At TITAN, anything is made possible, as all women who display their strengths in business strategies, campaigns and performance execution are symbols of social advancement.

Effectuating the core principles of IAA, TITAN Women In Business Awards provides utmost accessibility by implementing a streamlined process for entry submissions. To keep costs at a minimum, entry rates continue to remain affordable at only $295 for each separate business entry.

The awards has enlisted the support of professional judges with influential professionalism and expertise, pledging to maintain industry standards with their impartiality. TITAN victors are divided into Category Winners of the Year, Platinum Winners, and also Gold Winners. TITAN Award holders will be receiving an extensive amount of rewards to promote their winnings, while Category Winners will be presented with a graceful TITAN Statuette to commend the contributions of female elites.

The goals of IAA reflect with the TITAN Women In Business Awards, which is to publicize the realizations of all females internationally in their abilities to reshape the industry and indulge others in their tremendous success. Hence, the grand launching of the awards will fall on August 4, 2022, with the official winners being announced on December 15, 2022.

Adopting the TITAN Statuette design of the legendary Mo’ai statues, the 2022 TITAN Women In Business Awards has revitalized the trophy with a new tone to depict women perseverance and their dedication towards their professions. Finished off in matte black and touches of rose gold, the Statuette itself is the definition of elegance and reliability combined together.