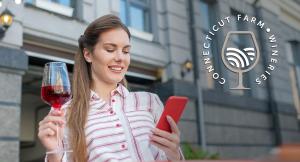 BOCA RATON, FL, UNITED STATES, August 2, 2022 /EINPresswire.com/ -- Connecticut’s popular passport program for the state’s farm wineries has gotten a digital upgrade with the launch of the Connecticut Farm Wineries Passport app. The mobile app, built by Boca Raton, Florida-based software developer Daruma Tech and sponsored by Connecticut Farm Wineries and the Connecticut Department of Agriculture, allows users to see the current offerings at the 35 participating wineries, map out trips to the wineries of their choice, and earn points towards prizes by digitally “stamping” their passports at participating wineries.

The app has been enthusiastically received, and in the month since its launch has seen over 3,000 downloads, said Bryan Hurlburt, Connecticut’s Commissioner of Agriculture. “That’s huge,” he said. “We would spend just under $20,000, previously, printing off about 65,000 passport booklets. And we would get about 2,500 returned with some level of stats. So, the fact that we’ve got 3,000 folks engaged and participating on the app within a month is really tremendous.”

Hurlburt sees the app as not only a way to bring interest and foot traffic the state’s wineries, but to nearby attractions as well—visitors to Connecticut wineries, he said, may also enjoy visiting nearby attractions. He added that his department is collaborating with the Department of Economic and Community Development to promote these opportunities for exploration and enhance the visitor experience. This feature was important to Daruma Tech’s Rick Griswold, who has family roots in Connecticut and still visits regularly. “In many parts of the state, you can go to a winery, but there are also restaurants, breweries, spas, or shops nearby that you might want to visit. So, Daruma Tech is really trying to elevate that local experience for the consumer, as well as contribute to economic development, by building on our Local Explorers products.” Griswold said.

The app also promotes the state’s economic development by keeping app users regularly engaged in Connecticut’s wine scene. For instance, push notifications sent through the app can let app users know about festivals, upcoming events and offers, plus the app’s built-in gamification of the passport program—through digital badges, leaderboards, and more—incentivize further exploration and visits to new wineries. These visits, in turn, can lead to visits to other nearby attractions.

“It’s been thrilling to see the very real economic impact of our apps in Connecticut,” Griswold said. “We couldn’t be happier with the engagement the state’s breweries have experienced through the Connecticut Beer Trail app, and we were honored and excited to be invited back to the state to build the Connecticut Farm Wineries Passport app. And seeing how quickly it has gained traction confirms that wine lovers are ready to embrace this technology.”