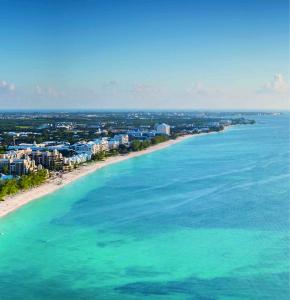 Recognizing the close bonds which both African Americans and Hispanic Americans share with the Caribbean, the Cayman Islands will participate for the first time in the premier conference for journalism education, career development, networking, and industry innovation, attracting leaders and influencers in journalism, media, technology, business, health, arts, and entertainment.

“We are honored to participate in this exceptional gathering of media professionals, who play such a critical role in sharing our stories and connecting our cultures,” said Mrs. Rosa Harris, Director of Tourism for the Cayman Islands, who promised that the Cayman Islands Department of Tourism will enhance the NABJ Founders’ Reception with a lively celebration of Caymanian and Caribbean culture and recognition of the work by the Founders. The Cayman Islands also will host a panel discussion focused on building bridges between the British overseas territory and diverse communities.

Sandra Dawson Long Weaver, an NABJ founder and organizer of the Founders’ Reception, welcomed the Cayman Islands’ partnership this year, saying: “African Americans and Caribbean people have a shared history and many cultural similarities. We are family, and we are stronger together. I’m excited to see what ideas and initiatives come out of this convention, the possibilities are endless.”

About the Cayman Islands
Located 480 miles south of Miami in the vibrant tranquility of the western Caribbean, this trio of tiny islands is a premier destination for discriminating travellers, divers, honeymooners and families. World renowned for its idyllic beaches and recognised as a sophisticated, diverse and memorable tourist destination, the Cayman Islands offers spectacular recreational opportunities along with warm, impeccable service. To learn more about the Cayman Islands, please go to visitcaymanIslands.com or www.divecayman.ky or call your local travel agent.