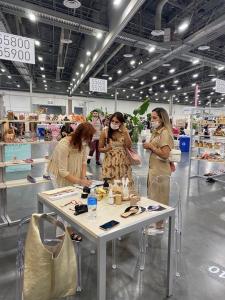 Brazilian Footwear brands are preparing to have a significant presence at the upcoming US trade shows.

The first show will be Playtime in New York. Focused on the children's market, the exhibition takes place between July 31st and August 2nd. The exhibition is considered strategic for positioning in the competitive North American market, especially in the children's segment. With the support of Brazilian Footwear, the brands participating include: Mini Melissa, Dalai Kids and Planet Sea.

Between August 13th and 15th, the Brazilian brands land at the Atlanta Shoe Market in Atlanta. This show, which works with distributors and representatives of the North American market, focuses on business in the Southeastern United States. Participating in the event, with the support of Brazilian Footwear, are Bottero, Ferrucci, Kidy, Melissa, Mini Melissa, Pegada, Petite Jolie, Piccadilly and Schutz.

Market
Accounting for almost a third of the value generated by Brazilian exports, the United States is the main destination for Brazilian footwear. Between January and June, Brazilian factories shipped 11.94 million pairs over there, for which US$ 181.8 million were paid, higher results both in volume (+88.3%) and in values (+106.7%) when compared to the same period last year.

According to Abicalçados' Trade Promotion analyst Paola Pontin, although it is historically the main market for Brazilian footwear abroad, there is still a lot of room for growth, since yellow-green products account for a share of about 1% of the total imported by the United States. "With the trade war installed between the United States and China, an issue is added to the high costs of freight from Asia, the North American market has increasingly turned its eyes to Brazil,” says Pontin. “It is an important moment in growth, which is why the participation of brands in local fairs is so relevant.”