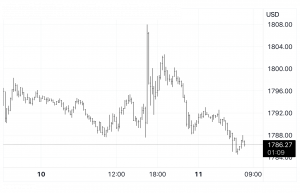 In yesterday’s commentary we predicted a volatile day with a potential trading range of $1785 to $1810 as the market focussed on US inflation; this proved to be a good call. Gold traded narrowly between $1795 and $1788 in Asia and Europe ahead of the July CPI data but burst into life in New York, staging a knee-jerk spike to a fresh 5-week high of $1807 as US consumer prices came in much lower than expected. However, the strength was short-lived as the yellow metal fell back to revisit the lows on hawkish comments on interest rates from senior Fed officials before ending with a marginal 0.11% loss at $1792 and gold has eased to a low of $1785 this morning. The US economy remains in focus today with the release of the latest Producer Price Index and there is potential for further volatility with a potential trading range of $1775 to $1800.

AUGUST 11, 2022 (Reuters) -Gold prices fell on Thursday, as the U.S. dollar and Treasury yields rebounded after comments from Federal Reserve officials pointed to aggressive interest rate hikes despite signs of slowing inflation in the world’s largest economy. Spot gold was down 0.4% at $1,784.88, as of 0253 GMT, after hitting its highest since July 5 at $1,807.79 on Wednesday. “Following U.S. inflation numbers, the dollar sold off very sharply and yields also dropped, but by the end of the day, the bond yields came back up and the dollar is slightly stronger now, which is hurting gold,” said Edward Meir, an analyst with ED&F Man Capital Markets. “Also, Fed officials said they still need to raise rates, which are bearish for gold. We could see a pullback in gold prices in the short-term towards $1,780.” The dollar regained some footing to trade up 0.2% at 105.420, after falling to its lowest since June 29 at 104.630 on Wednesday. Benchmark U.S. 10-year Treasury yields also rebounded to 2.7910%. Data showed U.S. consumer prices did not rise in July due to a sharp drop in the cost of gasoline, lifting hopes that the Fed would be less aggressive on their tightening plans going forward. However, Minneapolis Fed Bank President Neel Kashkari said that he continues to believe that the U.S. central bank will need to raise its policy rate to 3.9% by year-end and to 4.4% by the end of 2023 to fight inflation. Chicago Fed President Charles Evans remained more hawkish than financial markets, expecting that U.S. rates will top out at 4% next year. Gold is highly sensitive to rising U.S. interest rates, as these increase the opportunity cost of holding non-yielding bullion. Elsewhere, spot silver fell 0.6% to $20.44, platinum rose 0.2% to $943.83, and palladium gained 0.2% to $2,243.24.