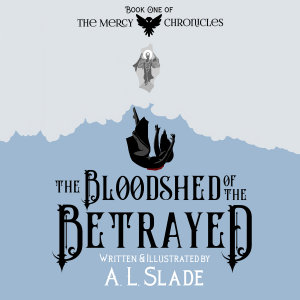 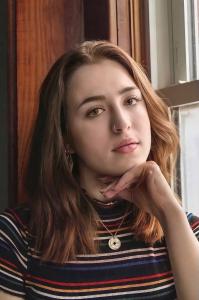 In collaboration with singer, actress, author, producer and voice artist Rachanee Lumayno, A. L. Slade's debut novel is now available as an audiobook.

I want my work to be accessible to any interested readers out there. I am taking the necessary steps to have my book procurable regardless of handicaps one may have in consuming my work.”
— A. L. Slade

STRATFORD, ONTARIO, CANADA, July 6, 2022 /EINPresswire.com/ -- Book portrays a love story between an angel and a human

After self-publishing her debut novel “The Bloodshed Of The Betrayed” through AmazonKDP and Barnes & Noble Press, A. L. Slade has gained considerable notoriety through her online presence, and in turn, has been asked about the availability of her book through an audio format. As an up-and-coming indie author who is self-made–and who wrote and illustrated her novel, alongside being her own manager and advertiser, to name a few–Slade found her audience inquiring about further accessibility of her book once it began gaining traction on social media, particularly TikTok.

So many people asked for an audiobook, which led Slade to collaborate and work with Rachanee Lumayno, singer, actress, author, producer and voice artist to produce and narrate Slade’s novel. Lumayno’s experience includes the pursuit of a photojournalism degree interrupted by an independent music career boasting four albums and over 1000 shows. Trained in comedy (sketch writing classes, and improv at Upright Citizens Brigade), Lumayno’s talents are featured across TV, film, and audiobooks. On-camera work includes Stevie TV (VH1), Buzzfeed, College Humor, and online sketches for Things Get Dicey and for ​dating coach Matthew Hussey.

The book tells the story of Angel Laramie, who is given emotions as a trial to decide once and for all if angels are ready to feel again. However, she soon becomes sidetracked by an infatuation with a human called Maggie, prompting her to neglect her orders and allow her mission to fail. She returns to her superiors in hopes of helping the human only to learn her feelings were a test. Her failure means her banishment to Earth until she fades away forever.

An excerpt from the book:
"I can’t even begin to comprehend the sensation that imbues my chest when I see her. As soon as I catch her in my periphery, I can’t bring myself to look away—when I regard her, I’m struck by the sight of her soul.
Even if it is merely for a second, I become transfixed by it; its colour is indescribable, one not yet seen nor termed by humans. Her presence encapsulates a warm hug promising comfort and safety, the burst of uncontrolled laughter in a spontaneous moment of jubilation, and the purest intimacy one could experience with their most trusted partner, and tethers them to a word I’ve never known before; home."

Available on Amazon and Barnes & Noble as an Ebook, Paperback, and Hardcover and on Kobo as an Audiobook.

About the Author
A. L. Slade is the 18-year-old author of “The Bloodshed Of The Betrayed”, the first book in the anticipated series, “The Mercy Chronicles”. Slade brings this skillfully adapted tale to life with her endless creativity and descriptive story-telling as her hopes to enlighten readers and portray young authors in a bright and intelligent way is the backbone of her writing career. Slade has spent the past 4 years cultivating her first book, "The Bloodshed Of The Betrayed" to be able to share it with the world. Slade has been writing for as long as she can remember, as her craft has always come very naturally to her, and is undoubtedly her greatest passion in this world.

A. L. Slade
The Bloodshed Of The Betrayed
alsladeauthor@gmail.com
Visit us on social media:
Twitter
Other