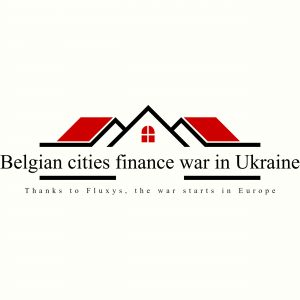 Andy Vermaut, as a peace activist from Vredesactie (Peace Action), brought a proposal to the municipal council of the Belgian municipality of Diksmuide. Andy Vermaut: "How do you explain to Ukrainian refugees in Belgium that we are also financing the war on them?"

I am persuaded that many people are unaware of the acts in which more than 70% of our cities and towns are unintentionally complicit.”
— Andy Vermaut, member of Vredesactie (Peace Action)

DIKSMUIDE, WEST-VLAANDEREN, BELGIë, July 13, 2022 /EINPresswire.com/ -- "Ukrainian flags are omnipresent in Belgian town halls," says Andy Vermaut, "yet these towns benefit from Russia's war on Ukraine via Fluxys."
Almost all town halls in Belgium have Ukrainian flags flying as a show of solidarity and support for the Ukrainian people, which is a nice gesture in and of itself, and in Diksmuide, a well-attended moment of reflection in response to the conflict in Ukraine was organized on Diksmuide's market square as a city of peace, all in solidarity with the Ukrainian people. All city councillors endorsed it, since Diksmuide knows all too well the devastation that war can produce, owing to the First World War, which decimated the whole city. Andy Vermaut raised this issue at the town council meeting on July 4, 2022, in the Diksmuide town hall. After all, by investing in Fluxys, we (the Belgian communities) are indirectly supporting Russia's war against Ukraine, making our acceptance of Ukrainian refugees less probable and less believable. This also undermines the credibility of our local and municipal administrations, 90% of which are involved in Fluxys. Andy Vermaut, a concerned citizen, finds this quite troubling.

Andy Vermaut: "The heinous battle in Ukraine has now lasted six months. This war has resulted in grave abuses of human rights, destruction of civilian infrastructure, and the deaths of several people. Fuel exports provide roughly 40% of Russia's government income. Previously, the European Union took efforts to curtail Russian coal and oil imports. Gas imports are likewise being phased out rapidly. Nonetheless, our nation remains an essential part of the Russian economy. Fluxys has had a one billion euro contract with Yamal LNG for the storage and transshipment of Russian gas since 2019. (LNG). Fluxys' terminals handle up to 10% of Russian natural gas (LNG). That gas (LNG) is nearly completely headed for Asian, Middle Eastern, and Latin American nations. As a result, it is not utilized in the Belgian market. The Yamal LNG contract, on the other hand, helps no one. As a consequence of this transaction, Fluxys was able to enhance its dividend per share by 7 cents, from €1.30 to €1.37. Municipalities and communities are still profiting from the conflict, and it seems that the dividend will be expanded in the future. Despite the fact that the United Kingdom prohibited all imports of Russian gas (LNG) in March, Russian gas (LNG) continues to arrive at the Belgian Port of Zeebrugge and is stored there for transportation to nations outside the European Union. According to the website Marine Traffic, nine tankers transporting Russian LNG docked alone in June 2022. This is equivalent to 1.5 million cubic meters of LNG gas."

A citizens point
Andy Vermaut: "My municipality is the Flemish-Belgian city Diksmuide, this city almost as big as Brussels, is also a Fluxys member via the many intermunicipal firms in which it is involved. Sadly, few people are aware that Fluxys is indirectly funding Russia's fight with Ukraine. That is why I requested that our Diksmuide mayor send a letter to Daniël Termont, the chairman of the Fluxys board of directors, raising concerns about this. That is why I offered my case symbolically to Diksmuid's mayor, Lies Laridon, as a citizens' point for the town council meeting on July 4, 2022. As you are aware, I have been a member of the Flemish peace organization Vredesactie (Peace Action) for many years, and my organization Postversa , of which I am president, collaborates closely with Vredesactie and Pax Christi, but I also brought this message to the city council as a concerned Diksmuide citizen. I'd want to thank the mayor, Lies Laridon, in particular for the rare chance to explain this here, since this is the first public political gathering in Belgium to allow such a citizen inquiry on this issue. Diksmuide deserves credit for it. I am persuaded that many people are unaware of the acts in which more than 70% of our cities and towns are unintentionally complicit. So I'm not only targeting Diksmuide's municipal council, but all Belgian local councils. Nonetheless, I find it odd that Fluxys has made no public disclosures regarding this. That's why I'm not pointing the blame at anybody in Diksmuide. After all, taking action is difficult if the knowledge is not shared with our local decision-makers. Personally, I think it is quite unfortunate that Fluxys does not share this information locally. We may have municipal representatives in all of these intermunicipal corporations that interact with Fluxys, but very little information goes back to them. City councils properly authorize the representatives, but rarely explain to these representatives what they do with these mandates. However, I am pleased and happy since the Belgian mayor, Lies Laridon, has said that she would likewise convey her worries. "