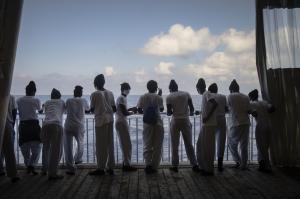 Migrants from West Africa look out at the Central Mediterranean Sea on June 11, 2021 aboard a rescue vessel operated by Doctors Without Borders (Credits: Ed Ou/The Outlaw Ocean Project)

WASHINGTON DC, DISTRICT OF COLUMBIA, UNITED STATES, July 28, 2022 /EINPresswire.com/ -- Today, The National Academy of Television Arts and Sciences (NATAS) announced that The Outlaw Ocean Project was nominated for two 2022 Annual News and Documentary Emmy Awards: one for Best News Coverage - Long Form, and another for Outstanding Crime and Justice Coverage for “Get Away from the Target” - Rescuing Migrants from the Libyan Coast Guard (in partnership with The Guardian).

The film was made by Ed Ou and edited by Will Miller. It depicts ongoing efforts by the EU to prevent migrants from reaching Europe. The EU has funded the Libyan Coast Guard which arrests migrants at sea and returns them to prisons in Libya where rape, extortion and murder are common.

The awards recognize the best in professional journalism in a wide range of television categories from breaking news to investigative documentary to news coverage, among others. The Outlaw Ocean Project is honored to be nominated for these awards amidst an expansive array of high-caliber journalism entries.

Adam Sharp, NATAS President and CEO said, “At a time when critical, monumental, and world changing events are more immediately available and accessible than ever before, the work of the journalists and documentarians that bring us the truth of these stories is under tremendous assault. We honor these individuals’ courage and excellence of craft that allows each of us to be better informed and understanding of the issues of our day.”

The Emmy Awards will be presented in two categories: News on September 28th and Documentary on September 29th. The ceremonies will take place at the Palladium Times Square in New York City.

About The Outlaw Ocean Project:

The Outlaw Ocean Project is a non-profit journalism organization that produces investigative stories about human rights and environmental concerns on the two thirds of the planet covered by water.

Raphaela Morais and Adrienne Urbina direct the organization’s video productions. Ian Urbina is the founder and director of The Outlaw Ocean Project, a non-profit news organization based in Washington D.C. that covers human rights and environmental crimes at sea globally.

One of the limitations of the traditional model used especially by legacy news outlets, is that worthy investigative stories are typically seen by only a small fraction of the public because these stories get published in just one outlet and typically in just one language. Part of what The Outlaw Ocean Project seeks to do is not just produce polished narrative investigative journalism but also amplify that journalism by converting it into other mediums to reach new audiences.