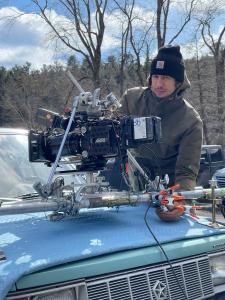 Olivier Metzler during his work 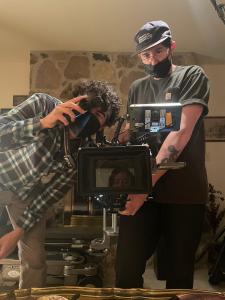 I remember thinking how beautiful the light in New York City is. The light really affects the way you see the world, I feel lucky to be able to work in this special City.”
— Olivier Metzler
NEW YORK, NY, UNITED STATES, July 14, 2022 /EINPresswire.com/ -- Cinema is an art. But it is not the art of a single artist, but of several artists who, with different tasks, contribute to creating a cinematographic work. In the world of cinema, all the elements must work perfectly: if there are excellent actors in a film but the script is not up to par, the final product will be bad; a script can be good, but the direction must be able to tell the story well; if there are the right actors, a good script, a capable direction but photography is not able to restore the right atmosphere, the film will still be bad to see. Therefore, there are many professional skills required in the world of cinema that must work in unison.

This week New York Art Life Magazine has turned the spotlight on a professional figure essential to the making of a film. We are talking about Olivier Meltzer, a talent behind the camera who through his multi-skills makes scenes special and illuminated. You can read the full interview on NYAL Magazine.

Olivier Metzler is an excellent cinematographer, gaffer, and First AC/Focus Puller based in New York City. He has worked on many projects that have premiered around the globe.

Commuter, which is in post-production is a short film directed by Edelle Kenny and it stars Kenny Sale. It was a great experience for Olivier to work on the cinematography of this project with an exquisite cast and crew as he enjoyed communicating the artistic and technical aspects of the film with his team.

His work also involved developing all image compositions in collaboration with director Edelle Kenny. It was a tight and intimate shoot for Olivier as he recalls operating both the camera and pulling his own focus with just a minimal setup. This allowed him to be nimble and fluid for the whole duration of the production. Olivier selected the camera format (Sony FX9) and lens format which was Orion Anamorphic Lenses. The combination of the two enabled him to take close-up shots of the talent while spacing himself from the shot, which is one of the main reasons he preferred to use anamorphic lenses.

Another successful project of Olivier is La Perrera which is on the festival circuit. This is a short directed by Alex Thiel, a notable figure in direction. The short film was an official selection at Phoenix Film Festival starring Anna Newbury, Chris Hayhurst, Regina Garcia, Christ Blonski, and other great cast members. Olivier was responsible for developing and creating the entirety of the lighting plan, aesthetic, and execution of the film’s lighting as well as the visual language. The lenses Olivier chose were also influential on the lighting as it softened the specular sources of the images, as well as made the skin edges of the cast softer.

Olivier is also an accomplished gaffer and played a pivotal role in the making of Michelle Bossy's drama-thriller 'Nobody's Home' shot by Seth Fuller.

Olivier Metzler has supported and assisted talents such as Tom Lipinski, Baize Buzan, Ruffin Prentiss, and Gabriel Rush. He stated that it was a challenging but at the same time rewarding project.

Despite using modern LED lamps, many special techniques were needed to match the look of classic tungsten lights. Reproducing a vintage atmosphere of the 80s also through the lights. Additionally, most of the film was shot day-for-night, shooting night scenes during the day. Constant support to the director of the lights in inaccessible and difficult to access areas such as the woods

The latest film from Luxury Store Bergdorf Goodman, "The Expressionists," is a stylish disco-themed short movie set in the iconic Manhattan store. The film stars Denée Benton, Ezra J. William, Laura Kim, Prabal Gurung, and Christina Kruse, and was directed by Elle Strauss. To create the perfect 1970s, look for the film, gaffer Olivier Metzler used LEKO 750 motion-picture spotlights to illuminate the dangling disco balls that were hanging over the set to reflect light spots onto the dancing actors.

The recreation of purple or violet used by Bergdorf Goodman for its branding was crucial to the shoot. This was achieved by matching the color values of LED lights rigged into the set to a swatch of purple used by the company. A specialty rig was constructed to light the actress sitting in the backseat of a yellow cab as it drove through midtown traffic.

Among his other skills, Olivier is a master in First AC/Focus pulling. He worked on a number of prestigious projects such as The Tin Building produced by Boardwalk Pictures, an award-winning production company that creates non-fiction, character-driven entertainment for audiences across the world. He also worked in the camera department for Amazon Prime Day’s campaign and maintained Arri Mini Large Format camera and Masterbuilt Classics lenses to ensure pristine image capture. Olivier continues to explore the limitless wonders of cinematography and light designing in the world of filmmaking.