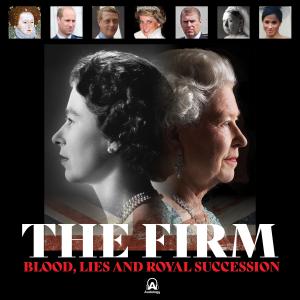 The new podcast series exploring the power of the House of Windsor is now the fastest growing series in the world at No.1 in the Apple Podcast history charts

THE FIRM: BLOOD, LIES, AND ROYAL SUCCESSION explores the controversies, scandals, and cover-ups of the British monarchy and tells how behind the opulence and regal tradition lies an underbelly compromising generations of hundreds of men and women who make up the royal household; from servants, consultants, advisers and protectors of the House of Windsor. Together, these disciples of the monarch have kept the institution humming, all under a reign of duty and destiny dating back to the ninth century.

In the latest chapter that dropped July 5, titled Affairs Below Stairs, THE FIRM production team looks into the story of Queen Victoria, also known as the Queen who was “not amused”, a stern, fearsome figure who expanded the British empire to control a quarter of the globe, and who remained in mourning for late husband Albert for more than half her life. But away from the public eye, The Firm discovered, Victoria was also a woman with a healthy love of physical contact, and whose close “friendships” with two of her servants threatened to become full-blown scandals.

Listen to the episode HERE.

In chapter three, THE FIRM revisited the reign of George III, the “misunderstood monarch” who was The King from 1760 until his death in 1820. Chapter Three: The Madness of George III, revealed ​​that the misunderstood monarch was far from being the mad tyrant as portrayed in Hamilton, and was in fact suffering from bipolar disorder, and became the victim of a smear campaign by America’s founding fathers in order to justify the war of independence.

Brought to you by the team behind America’s leading royals publication The Royal Observer, and featuring authoritative guests including insider royal correspondents, bestselling authors, former employees of the Palace and personal friends of senior members of the royal family, THE FIRM: BLOOD, LIES, AND ROYAL SUCCESSION serves as both a fascinating insight into 500 years of royal history, and an eye-opening exploration of just how the institution has evolved and adapted… and how it continues to do so in the face of recent unprecedented challenges to its standing.

The Firm is written by Dominic Utton, produced by Douglas Montero, and edited by Sean Kravit. The series is hosted by Jonathan Lock. Executive Producers are Dylan Howard (Fatal Voyage: The Mysterious Death of Natalie Wood, The Killing of Marilyn Monroe, Diana: Case Solved) and Melissa Cronin (Epstein: Devil in the Darkness).

Over the next nine weeks, new episodes will be available to download weekly via Apple Podcasts, Spotify, Google Play, and everywhere podcasts are available.

ABOUT THE ROYAL OBSERVER

The Royal Observer™ takes you behind the high walls, gilded gates and palace façades and into the very heart of the most famous families alive. The website and quarterly print edition explore history and tradition stretching back thousands of years. We celebrate all the pomp and ceremony that drive and define the public lives of royal families around the world, while also venturing behind closed doors into the shadowy areas of the royal palaces the public does not get to see. With the latest coverage of the entire royal families, exclusive news, photos and insider details of events, The Royal Observer™ takes users inside a rarefied world.

Audology is an audio-first studio and premium podcast network with a mission to make podcasting part of people's everyday lives. As a division of Empire Media Group, Audology develops, create, produces and distributes original audio and launches digital initiatives. With unparalleled access to the world's most innovative creators, Audiology produces unique listening experiences across a wide range of interests and demographics. Audology is a full-service operation, offering financing, production, marketing, and monetization.

Empire Media Group (EMG) is the new media landscape, where bold and authoritative content meets innovative delivery for passionate audiences. An award-winning, global, and next-generation multi-platform media company, EMG encompasses a powerful portfolio of assets that serve highly engaged audiences through a rich assemblage of content delivery mechanisms: from magazines, live events, and digital media, to video, television, audio, book publishing, and more. EMG’s suite of 12 vaunted brands makes it one of the world’s largest and most diversified modern media conglomerates, with market share across entertainment, fashion and beauty, luxury, travel, and specialist consumer titles. At EMG, we do not just serve readers; we serve users. Divisions of EMG include television and movie production company Mystify Studios, podcast studio Audology, literary publisher Harland & Wolff Publishing, marketing firm Elevate Strategic, EMG Ventures, and the non-profit foundation, the Institute for Healthy Media Minds, which is focused on creating a positive culture of mental health across the journalism, media, and public relations industries. With these six distinct business units united under a mandate of preeminence in content quality and innovation, EMG is a 360-degree media business that is poised for the future — broadening the reach of storytelling into virtual and augmented reality, programming, e-commerce, immersive events, branded content, innovative advertising solutions, and beyond.