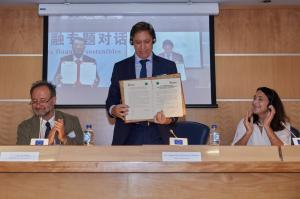 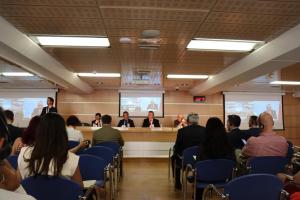 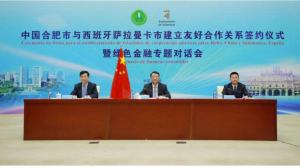 MADRID, MADRID, SPAIN, July 16, 2022 /EINPresswire.com/ -- The recently created think tank EU-China Trust organized a session titled “EU-China cooperation: Sustainable Finance, as a driver of change”. Prominent European and Chinese figures attended it to see how the cooperation promoted by EU-China Trust between Salamanca and Hefei, was materialized in:

- The announcement of the First Sustainable Finance Forun between China and the European Union with a Round Table with top experts in the matter.

EU-China Trust was born as a platform that aims to foster collaboration and cooperation between the European Union and China in the field of sustainable finance, engaging both public and private stakeholders in climate change mitigation policies and initiatives.

On July 14th of 2022, the event was hosted simultaneously at the Representative office of the European Commission in Madrid and the Hefei Town Hall, connected by videoconference between them and with other three venues to reach other speakers.

The primary objective of the event was to spark conversation about the potential opportunities for cooperation between the European Union and China, to combat climate change. This event has been organized by EU-China Trust with the support of the City Councils of both Hefei and Salamanca, and it is supported by the Spanish Embassy in China, the Chinese Embassy in Spain and the European Commission Representation in Madrid.

In a perfectly managed sequence, while the audience were being driven from venue to venue without noticing the change, participants located in five different locations offered a mostly perfect event, two presenters, in Madrid and Hefei, guided, aternatively the program.

First, the Director of the Representation of the European Commission in Spain welcomed the participants and audience, congratulating EU-China Trust for the initiative and the cities of Salamanca and Hefei for their cooperation.

Latterly, the President of EU-China Trust made his speech, leaving a remarkable thought: "Europe and China established initial commercial and cultural relations two thousand years ago through the Silk Road. For its part, silver and silk trade, following historic roads of their own, made both Hefei and Salamanca people prosper. Now, perhaps the new Lithium Road will make them flourish again."

Before the Mayors of Hefei and Salamanca, exchanged presents and shared some optimistic words about this relation, they offered meaningfull messages:

“We are eager to implement this collaboration, and companies from Salamanca are looking forward to finding partners in Hefei to work together”, stated Carlos Gracia Carbayo, city mayor of Salamanca, who also wished for “these new opportunities to produce tangible projects as soon as possible”. Meanwhile, Yungfeng Luo, expressed interest in fostering together “international trade cooperation, technological innovation, sustainable finance and cultural exchange”

The Ambassadors of each country confirmed the best wishes, adding their support for this new relations between cities with thosands years of history that now were coming together to grow under the umbrella os sustainable collaboration.

During roundtable, experts on Sustainable Finance from European Commission, People´s Bank of China, Shanghai Pudong Development Bank, Hefei University of Technology, Pontifical University of Salamanca and Peace City World, company who is develoing a 15 Billion Dollars project in Salamanca; discussed the advancements made in the field of green finance in both the European Union and China to explore ways in which both sides can cooperate.
The conversation versed around potential collaboration among public and private entities in sostenible projects thought European Union and China mixed partnerships.

The event also had the collaboration of Catedra China and Nihao Conecta and the participation of the Asociacion de Amigos de China. And, of course, the remarkable work of Hefei City Council in the chinese venue and EU-China Trust team in the Chinese and European venue. Also, special mention the contribution of Margaret Chen, behind the courtains this time, despite being the Vicepresident of EU-China Trust and one of the 100 most influencial Chinese outside the country.

Finally, the closing remarks were made by a representative of the Joint Committee of the International Monetary Fund and World Bank, who also serves as Vicepresident of EU-China Trust.

OrbWars Is Now In Early…

10 reasons why we celebrate…

The World Celebrates Never Give…

Never Give Up Day August…