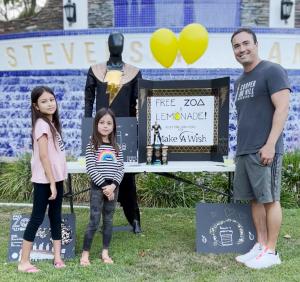 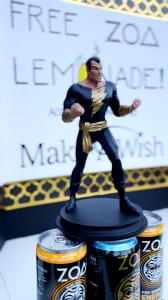 Leialoha Batgirl Carlos 8, and Kara Zor-El Carlos, 6, are shifting the balance of power in the lemonade stand universe by also offering ZOA in an effort to raise $100K for the Make-A-Wish Foundation at BlackAdamFitnessChallenge.com. 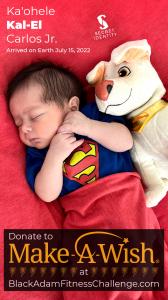 Kaʻohele Kal-El Carlos Jr., named after Superman and seen here with Krypto from Super-Pets, is helping his sisters raise $100K for the Make-A-Wish Foundation at BlackAdamFitnessChallenge.com.

My sister and I decided to celebrate our Papa Roy's life by doing something for the community by raising funds for the Make-A-Wish foundation in his memory as part of BlackAdamFitnessChallenge.com.”
— Leialoha Batgirl Carlos
STEVENSON RANCH, CALIFORNIA, USA, July 28, 2022 /EINPresswire.com/ -- Leialoha Batgirl Carlos 8, and Kara Zor-El Carlos, 6, are shifting the balance of power in the lemonade stand universe by also offering ZOA in an effort to raise $100K for the Make-A-Wish Foundation at BlackAdamFitnessChallenge.com.

In the latest video documenting their fundraising efforts and workouts with their dad (https://www.instagram.com/p/Cgf_8_2M2G8), the Carlos sisters promote their upcoming lemonade stand fundraising event happening this Sunday in memory of their grandfather who passed away on Monday, July 25th.

"We cried in bed when we learned that Papa Roy went to heaven" explains Leialoha. “My sister and I decided to celebrate our Papa Roy's life by doing something for the community and raising funds for the Make-A-Wish foundation in his memory as part of BlackAdamFitnessChallenge.com.”

Their grandfather, Roy Kakulu Alameida, was a pillar in the Hawaiian community and since his passing, there has been an outpouring of aloha and stories of how he supported various causes and individuals. He worked tirelessly to help the Hawaiian culture flourish as an educator at Kamehameha Schools and a published author who focused on Hawaiian mythology. “The coolest thing about Papa Roy was that he was a knight” exclaims Kara, referencing his knighthood in The Royal Order of Kamehameha I (Kamehameha I e Hookanaka).

The Carlos sisters will be giving away free ZOA and lemonade this Sunday, July 31st, at the corner of Stevenson Ranch Parkway and Holmes Place in Stevenson Ranch, CA from 4 – 7 pm. In addition to raising funds locally in their community, they are raising funds at BlackAdamFitnessChallenge.com with a goal of reaching $100K before the Black Adam movie, helmed by Dwayne Johnson, releases on October 21st.

"As Hawaiians, my daughters and I have a great sense of pride in seeing other Polynesian people reach great heights in their careers" emphasizes their dad, Kaʻohele Carlos, who leads the Core Experience Team for Amazon's Prime Video streaming service (https://www.linkedin.com/in/kaocarlos). "The most inspirational part of his success is that Johnson has remained grounded and connected to his ʻohana throughout his illustrious career."

ʻOhana, the word for family in Hawaiian, is top of mind for Mr. Carlos. Kaʻohele Kal-El Carlos Jr., was just born on July 15th at 4:05am PST. "First of all, I feel blessed that Papa Roy got to see his first grandson before he departed. I also feel extremely lucky to have healthy children and a very understanding wife who let me name all of them" admits Carlos. "We call our son by his middle name, Kal-El, which is Superman's real name from Krypton. Leialoha has the middle name Batgirl. Kara has the middle name Zor-El. Kara Zor-El is Supergirl's real name from Krypton. My wife happens to be named Diana, which is Wonder Woman's secret identity. With a Batmobile (https://youtu.be/_Mz6srk2e2w) and a Batcave office (https://youtu.be/_1TdWsHi4FE), I am Batman to complete our super-family."

In keeping with the superhero theme, the Carlos ʻOhana already purchased tickets on Fandango to see the movie “DC League of Super-Pets”, where Johnson voices Krypto, Superman’s superpowered pet and best friend. Fittingly, it will be Kal-El’s first movie.

The $100K fundraiser for Make-A-Wish at BlackAdamFitnessChallenge.com is an effort to build an online fitness community to support each other and the causes the group is passionate about. "One of the reasons I started the Black Adam Fitness Challenge was to get my daughters into fitness as a way to bond. Being from Hawai'i, having a strong familial support system is essential to my well-being." conveys Carlos. "As an example, I was on the island of Hawai'i to be with my dad before he passed and a friend suggested that I stop by Ken's House of Pancakes to give aloha to Aunty Debbie while in Hilo. While talking story with Aunty Debbie, I learned that she also had a parent in the hospital and we had the opportunity to console each other. I also learned that she is ʻohana with my friend Sri. When I texted Sri about Aunty Debbie and told her about my son, she let me know that her daughter Rain's baby is doing great and that her daughter Sade is also expecting. I am looking to build this same level of interconnected support for my existing and new fitness friends. In fact, while I was at the hospital, my HIIT coaches, Diana, Steven and Amanda, jumped in to create #BlackAdamFitnessChallenge videos including Coach Amanda's amazing cosplay fitness videos which can be seen at https://www.instagram.com/blackadamfitnesschallenge."

When asked what motivated them to do a lemonade stand, the Carlos sisters exclaim: "We just want Papa Roy to be proud of us and this was our best idea to help other kids through Make-A-Wish."

Kaʻohele Carlos currently leads the Core Experience Team at Amazon's Prime Video streaming service. To stay connected with his Hawaiian culture and his home of Hawai'i, Mr. Carlos created a lifestyle brand at PIDGINMOJI.com. PIDGINMOJI, the official sponsor of the Black Adam Fitness Challenge, is looking to expand into fitness apparel with SECRET IDENTITY shirts that reveal your superhero logo when you work up a sweat. Download photo and video assets at https://bit.ly/free_zoa_and_lemonade_assets