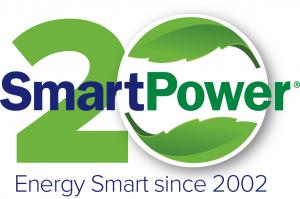 Our...investment continues to pay off year after year for the citizens of Connecticut and beyond. What an outstanding record of achievement!”
— Bryan Garcia, President Connecticut Green Bank

“Today SmartPower is 20 years old,” announced Brian F. Keane, the founder and President of SmartPower. “And we’re just getting started!”

Launched on July 6, 2002, the concept of a non-profit marketing firm dedicated to promoting clean energy and energy efficiency was the brainchild of Lyn Rosoff of Second Wind Enterprises. Rosoff brought together a group of private foundations — led by Ruth Hennig of The John Merck Fund, Stewart Hudson of the Emily Hall Tremaine Foundation, Michael Northrop of The Rockefeller Brothers Fund, Hooper Brookes of the Surdna Foundation and Lea Aeschliman of the Pew Charitable Trusts, to create an organization that would help consumers “walk the last mile from renewable energy awareness…to action.”

Rosoff and these foundations then teamed up with Bryan Garcia, of the then nascent Connecticut Clean Energy Fund, and together they pooled their funding.

“Our investment in SmartPower was one of the first investments we made as an organization,” said Bryan Garcia, President of the Connecticut Green Bank, formerly The Connecticut Clean Energy Fund. “And that investment continues to pay off year after year for the citizens of Connecticut and beyond. What an outstanding record of achievement!”

“Twenty years ago, climate change seemed a distant concern for many,” said Gary D. Simon, Chairman of the Board of SmartPower. “Installations of rooftop solar were slow and marketing campaigns were relatively ineffective. Through SmartPower’s research and implementation, we discovered how better to connect to customers and showed how the rate of adoption could be an order of magnitude faster. Now EV’s and rooftop solar plus battery storage installations have become commonplace, and the too real challenge of climate change is at our doorstep. Looking ahead, we’re dedicated to ensuring that SmartPower’s next 20 years are as successful as these past 20 in accelerating change!”

SmartPower’s "Solarize" campaigns have resulted in over $150m of installed rooftop solar and been credited with driving down the “soft costs” of solar by 20%. Further, SmartPower’s these campaign increased residential solar adoption by 1000% in the communities where they’ve been run. At the same time, SmartPower has been able to dramatically reduce the Customer Acquisition Costs from a national average of 30 cents/watt to 11 cents/watt.

Over the course of two decades, SmartPower has been recognized with numerous awards and honors for its groundbreaking work, including:

• The Green Power Pilot Award from the US Environmental Protection Agency and the US Department of Energy for the Clean Energy Communities Program (together with the Connecticut Clean Energy Fund), which not only helped to catalyze clean energy markets in that state but also created a network of local volunteer task forces that thrives to this day.

• The 2010 Clean Air Excellence Award from the US Environmental Protection Agency for the America’s Greenest Campus program, the nation’s largest and most successful on-campus energy efficiency program that saw more than 20,000 students at 465 colleges reduce their collective carbon footprint by 19 million pounds;

• The 2016 Clean Air Excellence Award from the US Environmental Protection Agency for the Rhode Island Energy Challenge: "Find Your Four!” campaign (together with National Grid) that engaged businesses, municipalities, non-profit organizations, and faith-based groups to get at least 5% of employees, residents, or members to find four simple energy reductions in their homes or businesses.

• And for the past two years, The Wealth & Money Management Awards named SmartPower “The Best Non-Profit Marketing Firm in the US”.

Throughout its existence, SmartPower has received funding from a variety of local, state, and federal governments, utility companies, philanthropic foundations, and businesses -- all to manage campaigns, perform studies and conduct clean energy and energy efficinecy projects in coast-to-coast.

July 6, 2022, begins a year of celebration for SmartPower! And to kick off the 20th Anniversary year, SmartPower has revised its logo to acknowledge and celebrate how far we’ve come and how much has been accomplished.

Have you worked for SmartPower? We want to hear from you!

Send us your information here so we can be in touch and invite you to our 20th Anniversary Reunion!