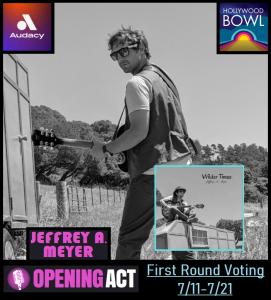 SANTA CRUZ, CALIFORNIA, UNITED STATES OF AMERICA, July 5, 2022 /EINPresswire.com/ -- Jeffrey A. Meyer – the Santa Cruz-based singer-songwriter whose style is influenced by pop-rock, funk, and folk – is proud to announce his selection for The Opening Act, an online competition from Audacy.

The winner of the competition, to be determined over several rounds of online voting, will have the exciting opportunity to perform at Audacy’s annual We Can Survive concert at the Hollywood Bowl as well as a $10,000 prize.

In 2021, winning band Young In A Million opened for Coldplay, Black Eyed Peas, Doja Cat, Kid Laroi, and Shawn Mendes. The 2022 lineup will be announced in early August.

Meyer is honored to be chosen for the voting stage of the competition out of 23,000 applicants. 2022 has seen his triumphant return to music with the release of his debut album ‘Wilder Times’ on June 3rd, written from the wood camper Meyer built himself that overlooks the pacific coast from the hills of Santa Cruz.

The album is inspired by the polarities of life, its highs and lows, and is a piece of international collaboration with musicians from the UK, Canada, and across the US. Dave Roe, long-time bassist for Johnny Cash, is featured on five of the tracks.

“I did not expect to make it to this point when I entered. Now that I'm in, I plan on doing everything I can to win and perform at the historic Hollywood Bowl,” commented Meyer.

To vote for Jeffrey A. Meyer in The Opening Act competition, click here.

Communications
Jeffrey A. Meyer
email us here
Visit us on social media:
Facebook
Other