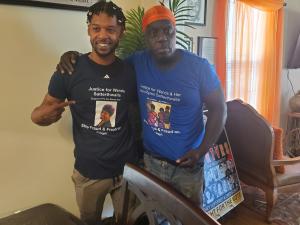 Rymir and Marcus - Stop Fraud and Fraud Upon the Court

Rymir Satterthwaite Says Special Thanks are in Order to New Jersey Attorney General who is following the Law regarding his fraud case and fraud on court.

PHILADELPHIA, PENNSYLVANIA, UNITED STATES, July 18, 2022 /EINPresswire.com/ -- A decade long allegations of fraud and fraud upon the court may be coming to end or at least on the family court side which is a pending federal case: caption: Lillie Coley, Rymir Satterthwatie et al vs. New Jersey Supreme Court docket number 1:22-cv-01636.

This case appears to involve mispresentation of property holdings from a party to avoid the demands of the complaint which abrupted the judicial process causing allegations of fraud and fraud upon the court for the past ten(10) years. See LINK for more details of this public case both in New Jersey and Pennsylvania.

As with this family case also came a pending Civil Law Case L-4749-14 which involved the damages of the family action. Either way it appears the Attorney General of New Jersey Matthew J. Platkin states in memo he is seeking a quick resolution and asked the Federal Court for early responses.

Rymir took to his social media to inform his supporters that he is thrilled about the actions of the Attorney General and appreciates his dedication to public service and in following the law.

Marcus Arbrey has become advocate for justice for Rymir, his mother and Dr. Coley which appears to be having a impact. Mr. Arbrey lost his son Ahmaud Arbrey about five(5) years ago to violence when he was shot and killed while jogging in Georgia. Rymir is the same age as Marcus's son Ahmaud. See Link for details on Ahmaud - https://en.wikipedia.org/wiki/Murder_of_Ahmaud_Arbery


**********************
Social Justice Group - This is a News Reporting Organization that provides a platform for individuals/groups to post their opinions, be it a blog post, video, or social media post.

The views expressed or opinion disclaimer:
The opinions expressed within the content are solely the author’s and do not reflect the opinions and beliefs of the website or its affiliates. All persons are entitled to “freedom of speech and expression”.

Registration Is Open for First…