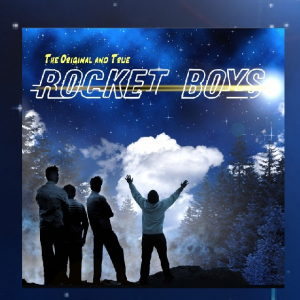 BECKLEY, WEST VIRGINIA, UNITED STATES, July 11, 2022 /EINPresswire.com/ -- Rocket Boys The Musical, based on the New York Times #1 best-selling memoir by award-winning author and West Virginia native Homer Hickam, is being presented by Theatre West Virginia from July 14th through July 23rd. The show will be performed nightly Tuesday through Saturday at 7:30 PM at the Cliffside Amphitheater at Grandview Park, part of the New River National Park and Preserve near Beckley, West Virginia.

During the show’s closing weekend, July 22nd and 23rd, Homer Hickam will be attending the performances at the Cliffside Amphitheater and will be autographing copies of his books and posing for photos with fans after each show. Fellow rocket boy, Roy Lee Cooke will also be visiting the amphitheater on July 19th.

Rocket Boys The Musical tells the true tale of a misfit coal miner's son (Homer “Sonny” Hickam) who engages some skeptical friends to join his dream of rockets and space. The original book by Homer Hickam is one of the leading Community/Library Reads across the country, a staple on school lists, and is now published in nearly every language across the globe.

Now the Rocket Boys return to West Virginia this July 2022, where the musical has been given the permanent status of a State Historical. It is the only stage production anywhere bearing a native son and author Homer Hickam's name (Co-Book) and approval and continues striving to honor the legacy of Mr. Hickam's life and work.

Since the original success of the Rocket Boys memoir, the story has been adapted into the critically acclaimed film, “October Sky,” starring Laura Dern and Jake Gyllenhaal. Hickam has written over 20 books, many of them best sellers, after retiring from a career with NASA in 1998.