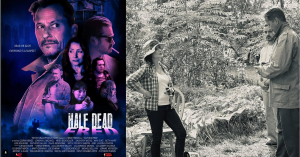 Behind-the-scenes on the set of Half Dead Fred, a new feature horror from Bron Theron.

Paranormal happenings are on the rise in Flint, Michigan this summer. On Aug. 7th, Bron Theron’s latest film, Half Dead Fred, will debut at the Capitol Theater.

I was also super psyched to work with this particular cast! They’re all really wonderful actors, so to get a chance to work with each of them was a real treat!”
— Heidi Schooler
LOS ANGELES, CALIFORNIA, UNITED STATES, July 28, 2022 /EINPresswire.com/ -- Paranormal happenings are on the rise in Flint, Michigan this summer. On August 7th, 2022, Writer/Director Bron Theron’s latest film, Half Dead Fred, will debut at the famous Capitol Theater. The new film, shot in Flint, will star Corin Nemec and Jordan C, Michael as they work to solve a mysterious supernatural murder case. Rising actress Heidi Schooler, known for her on-screen and voiceover work, plays the supporting lead role of Roberta Dalton. Jason London, a star in his own right, plays the role of Matthew, Roberta’s husband.

Schooler reflects on the project saying, “I had the honor of being part of the fab suspense paranormal film, Half Dead Fred, which we shot in Flint last October. Bron is an incredibly talented writer and director, and the entire cast and crew were awesome to work with.”

Heidi Schooler has been steadily working in Hollywood for years. Viewers may remember her from recent roles such as Scarlett Watkins in the Roku TV series, Cypher, or the title role in the newly-expanded comedic series, Read to Me, Heidi, wherein Heidi and her famous side-kick puppet, Millicent, tell stories with the help of Heidi’s many voiceover characters.

Working together with director John Beaton Hill, Schooler stars in and is the creator/producer of the comedic film Millicent & Me and the Apple Tree, which has been making its mark on the indie-film festival circuits. She is coming off her recent win for “Best Comedy Short” at the French Riviera Film Festival. Before that, Schooler has been nominated for over ten others, including the Toronto Independent Film Festival of Cift, the London Indie Short Festival, the San Francisco Arthouse Short Festival, Niagara Falls International Short Festival, The Kapow Intergalactic Festival (in L.A.), and the Hong Kong Indie Film Festival. Also entertaining audiences, it was an Official Selection in the Paris Independent Film Festival, and at the We Make Movies International Film Festival (in L.A.).

Bron Theron’s Half Dead Fred is one of Schooler’s most exciting projects to date.

“What was so exciting about Half Dead Fred was I knew it was going to be a fabulous film to work on as soon as I read the script! Bron has written such a cool supernatural film that's also funny, with tongue-in-cheek humor, so I know audiences will enjoy it as the story unfolds! I was also super psyched to work with this particular cast! They’re all really wonderful actors, so to get a chance to work with each of them was a real treat!”

The story behind Theron’s inspiration for the film helped Schooler understand the characters more thoroughly. Theron began work in Flint to help beautify the community with the Flint Public Art Project, where he met the Founder of FPAP, and one of the feature film project’s future producers, Joe Schipani, who wrote the book called “Haunted Flint.” Schipani is also featured in Half Dead Fred as the character “James.” The world premiere is a red carpet event that will see the cast, crew, and production team return to Flint next month to debut the film.

Half Dead Fred premieres on August 7th, 2022, at the Capitol Theater in Flint, MI - You can purchase tickets to the event by clicking here.
For more information about Half Dead Fred, connect on socials @thehalfdeadfred & @whiteninjaproductions.

Heidi Schooler is an accomplished theater, TV, and film actress who began her career as a child actress and dancer, studying in NYC, at The American Musical and Dramatic Academy, the American Ballet Theater School, and The International School of Dance at Carnegie Hall. Schooler studied musical theater at Syracuse University before moving to Los Angeles to complete her studies in both theater and dance at the University of Southern California.
She was on CSI: NY (w/Gary Sinise), The Chronicles of Riddick: Assault on Dark Athena video-game in mo-cap, (with Vin Diesel), appeared in David Lynch's Inland Empire, WWII film, Beautiful Dreamer, & played the title role for Mischief Films/BBC's movie Calling Hedy Lamarr.

In addition to her work in theater, film, and television, Schooler has established herself as a sought-after voiceover and commercial actress. She is in 2 separate comedic commercial spots for DirecTV; Just voiced a few characters for a new Nickelodeon animated series called Rock, Paper, Scissors; and was a character on Cartoon Network's We Bare Bears. In the past, she's most recently been the voice of Walmart (TV & Radio), Oliveda, Neutrogena, and is Lois Lane for Warner Bros. 's past digital re-release of "Superman 2.” Currently, Schooler is in development writing a comedic TV pilot.