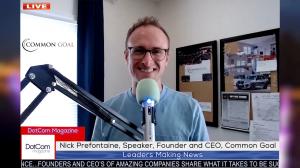 The Power Of Zoom Interview Issue

Nick Prefontaine joins other leaders selected by the editorial team of DotCom Magazine to be interviewed on the top trending show.

Common Goal’s Mission is to provide people with the support and tools to achieve their limitless potential. We inspire and lead motivated people to their common goal. Through our life experiences of overcoming adversity we can provide a unique perspective to our clients. Most importantly we help them to take their first steps. We understand that this is the most important step and makes possible all of our clients other steps.

Nick Prefontaine joins other leading CEO’s, founders, and thought leaders that have participated in this informative and popular interview show. In the interview with Andy Jacob, Nick Prefontaine discusses the newest offerings of Common Goal, what makes the company different than other firms, and shares thoughts on leadership and entrepreneurship. Nick Prefontaine joins other leaders building strong and compelling companies that have been invited to participate in the exclusive series

Andy Jacob, CEO of DotCom Magazine says, “The interview with Nick Prefontaine was amazing. The success of Common Goal is a true testament to their team and their people. It was a real honor to have Nick Prefontaine on the video series.

Andy Jacob says, “It’s the goal of DotCom Magazine to provide the absolute best in what entrepreneurship has to offer. We have interviewed many of the world’s leading entrepreneurs in their respective field. It takes amazing leadership to build a company like Common Goal. There are so many powerful and talented entrepreneurs throughout the world, and I am extremely fortunate to interview the best of the best. I always come away humbled by how many talented people are building amazing companies. As we scout the world for interesting entrepreneurs and companies, it is always a wonderful experience to meet leaders like Nick Prefontaine who are forging an incredible path for others. At DotCom Magazine, we believe entrepreneurs are the heartbeat of the world. We believe it is a world where risk takers must be lauded, saluted, and respected. Successful entrepreneurs get up every morning and give an amazing effort. We salute the business leaders of this world like Nick Prefontaine”.