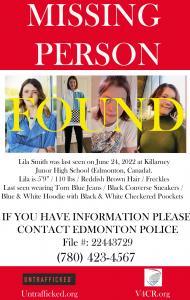 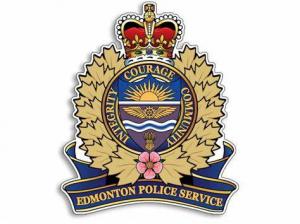 On June 24, 2022, Lila Smith went missing in Edmonton, Alberta. On June 28, 2022, V4CR was contacted regarding the missing person’s case. Untrafficked and V4CR conducted a joint operation in order to worked diligently to push information about the Lila on social media platforms and in a press release. Contact was made to close family members regarding the case details. Untrafficked and V4CR understands the importance of working directly with law enforcement in these types of operations. On July 2, 2022, Lila Smith was found in a hotel in Oregon City, Oregon.

According to the FBI, 41-year-old Noah Madrano was arrested and is currently being held on state charges. More charges against him may follow as the investigation continues.

Edmonton police released a statement writing that Smith and Madrano may have connected online. "This and many other details are still to be confirmed as multiple agencies continue with their investigations," the department wrote.

Untrafficked® is a national anti-child sex trafficking nonprofit organization that educates and empowers Americans to speak and act with one voice in defense of at-risk children and children that are survivors of sex trafficking.

Untrafficked® is diverse across political, ethnic, and demographic categories, and deploys advanced technology, utilize deep intelligence capabilities, and leverage our well-established affiliate network to maximize our impact in communities across the United States. We collaborate with well vetted organizations in order to establish effective alliances to bring operational support to make a lasting effect on local communities. Untrafficked® is committed to confronting indifference and combating child sex trafficking in all its forms wherever it may be found.