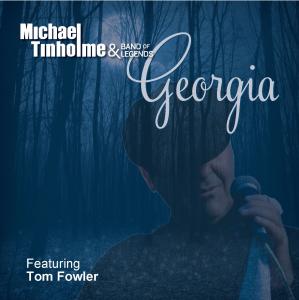 A song that is part of Tinholme’s incredible story. The stuff that happens in dreams or movies.

“My story includes hundreds of hours of listening to Ray Charles’ music as a boy, to an incredible journey that led to recording Georgia with bass legend Tom Fowler & Band of Legends.”

Now, I don't want to make Tom uncomfortable, but I dedicate this song to my friend Tom Fowler, a legend of the Bass and Music, known for his work with Ray Charles, Frank Zappa and others. Tom absolutely changed my life, creating possibilities for me making music. So “Georgia” is in appreciation and gratitude for Tom.”

Ray Charles’ music was played almost daily in my house growing up. My mother played the grooves off his country record and everything he put out. I must’ve heard the song “Georgia” and “Born to Loose” and many others, hundreds of times before I was a teenager. His albums are still at the top of my favorites to listen to. When Ray Charles’s music is playing, I think it’s just a fact that everyone stops to listen. His ballads could be sad and heartbreaking, and then he could tear it up with a joyful release.” MT

Industry titans like the BBC, NPR, USA Today, have recognized the spark that is Michael Tinholme. Listen to “Georgia” featuring legendary bassist Tom Fowler and we think you will too.

Michael Tinholme’s story is the stuff dreams are made of or legends.
It’s the stuff that happens in movies”.
Tom Berg, USA Today