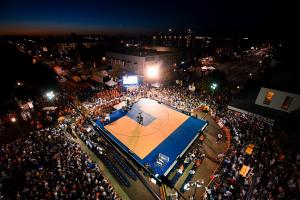 ATLANTA, GA, UNITED STATES, July 11, 2022 /EINPresswire.com/ -- MELT, the Atlanta-based, award-winning sports, sponsorship, event, and NIL marketing agency along with Auburn University Athletics Marketing Team, recently captured a gold "best of" medal in the Community Engagement & PR category for their production of the "Tip Off at Toomer's" event held last October 21 at the famous intersection of College and Magnolia in Auburn.

The award was one of three gold medals that Auburn was awarded at the recent NACMA awards ceremony held in conjunction with the 57th annual 2022 NACDA & Affiliates Convention held in Las Vegas on June 29.

The event, created by Auburn Men's Basketball Coach Bruce Pearl, the Auburn Athletic Department, Playfly, MELT, and the City of Auburn has grown to become a beloved tradition among Auburn students and alumni. MELT and MELT'S CEO and Auburn Alumnus Vince Thompson produced, activated, and executed the event, which attracted thousands of fans. The 2021 event featured both the men's and women's basketball teams that included two NBA first-round draft choices in Jabari Smith and Walker Kessler. "Tip Off at Toomer's" also recently won a silver "Ex Award" from Event Marketer Magazine as "Best College Campus Activation."

The event is also emotionally meaningful for Thompson as he worked his way through Auburn University in the Sports Information Department during the heyday of Bo Jackson and Charles Barkley.

"This is so special and meaningful to me to be able to contribute to Auburn University and Auburn Athletics," said Thompson. "And I am proud to be a part of a winning team and establishing a great tradition at Auburn."

The World of an Established…

Radio Stations Around The World…

Bioxytran Interview at the Emerging…