Scene from Dad and the Fridge Box 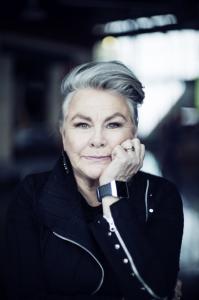 'DAD AND THE FRIDGE BOX' is based on the poem by Agnes Walsh. The story of how the old ones found a use for everything. When Jeannie lost her father, he is waked at home, his pine box laid across two chairs in the parlour. Jeanie’s father has long lived inside a box.

Film director Mary Walsh created and starred in This Hour Has 22 Minutes , CBC’s wildly popular take on current affairs. The series earned her many of her numerous Gemini awards and showcased her dynamic range of characters, including the flagrantly outspoken ‘Marg Delahunty’. Walsh’s recent TV credits include CBC’s Hudson & Rex, Global’s Rookie Blue, HBO Canada’s Sensitive Skin, CBC’s Little Dog for which she was nominated for a 2020 Canadian Screen Award, and numerous guest appearances on This Hour Has 22 Minutes .
Outside of the film, TV and theatre world, Mary is an outspoken advocate for mental health and addiction awareness as a spokesperson for Bell Let’s Talk. She is a staunch supporter of the Wabano Centre for Aboriginal Health in Ottawa, she also lends her time and voice to the CNIB, St. Joseph’s Hospital and CAMH.