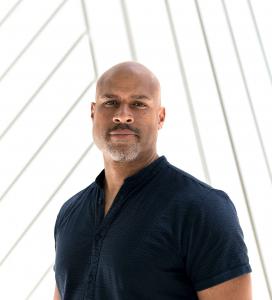 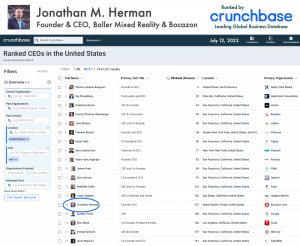 About The Promise of Web 3, Blockchains & Other Emergent Technologies

A singular opportunity for business founders to shape the direction of these nascent technologies to empower themselves, their communities, and the larger economy.”
— Jonathan Herman
MIAMI BEACH, FLORIDA, UNITED STATES, July 14, 2022 /EINPresswire.com/ -- At a time when tech stocks have plummeted and skepticism over Web 3 has risen, Jonathan Herman will speak on the topic of Emerging Technologies at the AEO National Symposium and Gala on July 20th in Washington, DC. This gathering marks the 30th annual conference of the Association for Enterprise Opportunity, one of the nation’s leading economic development organizations, which has helped foster the growth of more than two million businesses in the United States. As a former National Board Member of AEO and currently ranked among the Top 50 CEOs in the U.S. (by Crunchbase) for his two tech ventures (Baller Mixed Reality and Bocazon), Jonathan will help frame the national discussion of Web 3, blockchains and cryptocurrency for the hundreds of business executives, economic policy makers, and non-profit administrators in attendance.

“I greatly appreciate the invitation from AEO to lead-off the ‘Next Frontier’ segment and illuminate what has become a crucially important topic for entrepreneurs operating in today’s technology environment,” said Jonathan Herman. “It’s understandable that many people feel trepidation given recent headlines, but I hope to convey what I consider to be a singular opportunity for business founders to shape the direction of these nascent technologies to empower themselves, their communities, and the larger economy. We have a unique moment in history when ‘decentralization’ provides a mechanism to finally level the playing field with equal access for those who responsibly leverage its potential.”

Visit http://AEOWorks.org/Impact30-Conference for more info, and look for live-streaming via the Roland Martin Daily Digital Show.

Bocazon.com is the Second-Ranked eCommerce Platform in Latin America, focused on the “Canal Region” of Panama, Colombia & Costa Rica - with 58 million consumers and growing demand for quality online shopping.