Latest News
Home /Blog/How Much Do People Really Know About Voter Fraud and the 2020 Election? Now There’s a Test For That. 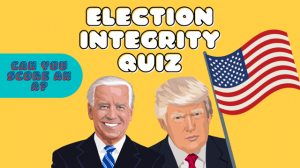 The non-partisan A-Mark Foundation dug deep into the fraud allegations and developed a new way for people to test their knowledge of the facts.

We need to find new and creative ways to make people aware of the facts behind our electoral process. Our democracy depends on it.”
— ob Eshman, non-partisan A-Mark Foundation's newly-appointed CEO

The Santa Monica, Calif.-based A-Mark Foundation has launched a quiz-based social media campaign to spread deeply researched information on the fairness of the 2020 presidential election, allegations of voter fraud, and post-election lawsuits.

The quiz links to the foundation’s new website, 2020election.org, where all the facts are footnoted and linked to supporting evidence.

“We need to find new and creative ways to make people aware of the facts behind our electoral process,” said Rob Eshman, the foundation’s newly-appointed CEO. “Our democracy depends on it.”

Produced over a period of several months by a team of researchers led by A-Mark Foundation Vice President Tracey DeFrancesco, 2020election.org offers the media, researchers, and the public a source of unbiased, non-partisan research surrounding the 2020 election. One aim of the research is to investigate the allegations of voter fraud that motivated the Jan. 6, 2021 attack on the U.S. Capitol, the subject of Congressional hearings wrapping up this week.

The website’s main findings include:

-President Donald Trump has made over 900 claims about rigged or stolen elections, his first one in 2012, four years before his successful presidential campaign in 2016. https://the2020election.org/trump-claims-elections-rigged-or-stolen/

-There have been 215 convictions for voter fraud that occurred in U.S. elections from 2016 to 2020. Of the 107 convictions related to a presidential or -congressional race, 102 cases involved one vote, three cases had seven votes or less, and two cases had an unknown number of votes. https://the2020election.org/voter-fraud-convictions-since-2016/

-As a result of state recounts, Joe Biden’s margin of victory increased in Arizona by 360 votes and in Wisconsin by 87 votes, and decreased in Georgia by 891 votes. The change in votes is not known for Texas; Pennsylvania audit results are pending as of June 6, 2022. https://the2020election.org/2020-election-recounts-and-audits/

-Republicans filed 82 post-2020 election lawsuits, resulting in four wins and one partial win. Two of the wins had batches of 270 and 216 provisional ballots excluded in Pennsylvania, while the partial win led to certain provisional ballots being set aside. Five post-election lawsuits were filed against Republicans; -one is a loss and four are pending. https://the2020election.org/voting-related-litigation/

-A-Mark researchers compiled all instances of President Trump’s claims, a detailed list of all election lawsuits and voter fraud convictions, as well as other background material.