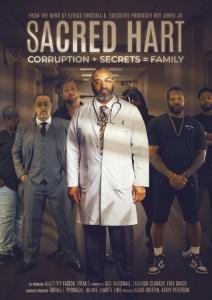 PENSACOLA, FLORIDA, USA, July 29, 2022 /EINPresswire.com/ -- Sacred Hart Hospital's Medical Director, Dr. Darin Brooks, is a man burdened by a tragic past while just trying to make it through to fight another day. The father of four, whose children have all followed in his footsteps and joined him as residents doctors at the hospital, is surrounded by drama. While bearing the tragic loss of his wife's passing after being in a coma, Dr. Brooks has to fight off the continuous advances of the nurses and their affairs, deal with his children’s mothers and their contonous drama, and have his authority constantly questioned by the board of directors. If that weren't enough, he's always looking over his shoulder thanks to his son's and daughter's backstabbing ways, while having the city’s biggest drug dealers coming for him. On top of all that, he's always busy keeping the police out of hospital’s affairs.

For Elrico, a retired member of the United States Army who defended his country for over eight years with two tours in combat danger zones, the series married his two passions - talent management and Pensacola.

“When I started Manager of the Year Talent Management, it was always with the intention of bringing together wildly talented actors, directors and producers to create a story that was so captivating that audiences couldn't get enough. With Sacred Hart, I've achieved that goal,” explains Elrico Tunstall, CEO and founder of Manager of the Year Talent Management. “With Sacred Hart, I get to show off my hometown and my love, Pensacola, Florida. The series will feel both familiar and unique to audiences. The talented cast takes on real life issues such as family, love and most importantly corruption. It's Greys Anatomy, meets Power, meets Fox Television’s Empire all wrapped into one.”

Be the first to see the thrilling series trailers by subscribing to @DNOTORIOUSMOTYShow on YouTube.

Connect with Manager of the Year Talent Management on social media by following @SacredHartTVSeries on Facebook and Instagram.

For more information, or to arrange an interview, please contact: