Latest News
Home /Blog/Go Behind the Sound of “Ted Lasso” with the Emmy-nominated Sound Team from the Show! 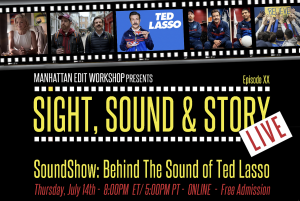 The Emmy-nominated sound team of "Ted Lasso” take a deep dive of their work on the AppleTV+ hit show.

Inside Episode XX: Sound is one of the most important elements in television and can be used to evoke emotions, indicate mood and elevate a performance. Join the Emmy-nominated sound team behind the wildly successful AppleTV+ show "Ted Lasso" as they discuss sound design, foley techniques, sound recording tricks and much more. Emmy-nominated Supervising Sound Editor Brent Findley, three-time Emmy-nominated Co-Supervising Sound Editor and Dialogue Editor Bernard Weiser, and Emmy-nominated foley Artist Sanna Kelley will be joined by Moderator Chad Anderson to dissect scenes and discuss their extraordinary work on sound from the series.

This event wouldn’t be possible without our Master Storyteller Sponsors: OWC, AJA Video Systems, American Cinema Editors, & EditFest Global; as well as our Technology Sponsors: ZEISS, and Filmmaker U. We are also grateful for the continued support of our partners ProductionHUB, Digital Cinema Society, LAPPG, NYWIFT, Film Fatales, LUMOS PR, and The D-Word.

To register, please go to: https://bit.ly/3OLEcF5

About Our Panelists:
Brent Findley, CAS, MPSE, is an award-winning Supervising Sound Editor and Sound Designer who has worked on numerous film, television, and commercial projects. His accolades include an Emmy nomination; a Cinema Audio Society award; and Golden Reel Award for "The Liberator," and nine MSPE Golden Reel nominations for sound editing projects such as AppleTV+'s "Ted Lasso," NBC's "The Good Place," and the Grammy-winning docuseries "The Defiant Ones."

With a focus on episodic television, his current projects include AppleTV+'s sports comedy "Ted Lasso" Seasons 1-3, "WeCrashed," and "Little America." He was also the supervising sound editor on Peacock's "Rutherford Falls" and "MacGruber"; Amazon's romantic comedy "With Love"; and Netflix's "Atypical."

Sanaa Kelley is a California-based Foley Artist and founder of Reel Foley Sound with 27 years of industry experience. Her accolades include three Emmy-nominations, 20 MSPE Golden Reel nominations for Foley on projects such as AppleTV+'s sports comedy "Ted Lasso," currently airing for Season 2 and renewed for Season 3; AMC's Emmy- winning series "The Walking Dead"; Disney +'s "The Right Stuff" as well as The CW's "The 100." In 2016, Sanaa's earned a Golden Reel Award as part of the Sound Editing team for her work on the live-action film "All the Wilderness."

Sanaa's Foley skills have been featured in films such as "Cry Macho" directed by Clint Eastwood; HBO's "Those Who Wish Me Dead" starring Angelina Jolie; and Universal's "Ouija" starring Olivia Cooke. In addition to TV and features, Sanaa worked Foley for Nickelodeon’s popular animated series "Avatar the Last Airbender" and "Rugrats."

Born and raised in Morocco, Sanaa is a long-time resident of California and is one of TikTok's fast-growing stars, with over 2 million followers in one year.

Bernard Weiser is a three-time Emmy-nominated supervising sound editor, dialogue editor and sound designer with 37 years of experience in film and television. His work on AppleTV+s “Ted Lasso” earned Bernard his third Emmy nomination for Outstanding Sound Editing For A Comedy Or Drama Series (Half-Hour) And Animation.

In 2019, Bernard earned two Emmy nominations for Outstanding Sound Editing For A Limited Series, Movie, Or Special for his work on HBO’s “Deadwood: The Movie” and “True Detective” where he served as a dialogue editor. Additionally, he has 21 Golden Reel Award nominations from the Motion Pictures Sound Editors (MPSE) for his work on hit TV series and films including “American Hustle,” “The Hurt Locker,” and “Spider- Man 3.” Furthermore, Bernard served as the sound effects editor on “The Hurt Locker” which went on to win the Academy Award and BAFTA for Best Sound. Currently, along with his work on "Ted Lasso," Bernard is Supervising Sound Editor on “Law & Order SVU” for NBC.

Chad Anderson is a college professor, animation geek, poet, video editor & skateboarder from the Jersey Shore. He has worked on a range of editing and visual FX projects for corporate, educational, broadcast, non-profit and military organizations all over the country (and once in Korea). Previous clients have included E! Entertainment, "The Charlie Rose Show," the WB, The Count Basie Theatre and a film that went straight to video with John Stamos in it. He holds a Master’s in Education from NJCU and has been teaching for over 18 years. His favorite movie is "Joe Versus the Volcano."