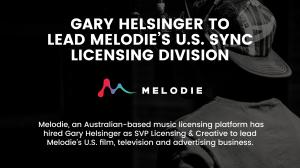 Based in Los Angeles, Gary will focus on the American film, television and advertising space, from studios to networks, production companies, agencies and music supervisors.

Founded in 2017, Melodie is a tech-first boutique music licensing company & publisher based in Sydney, Australia. Melodie’s service stands apart with authentic music from more than 100 composers and independent artists, a value-driven pricing model, an elegant user-experience, and pre-cleared master & publishing rights for all media usage, globally.

While relatively new to the U.S., Melodie is well-established in Australia, providing copyright safe music to creative tech platforms via a unique API product, and has had more than one million minutes of music broadcast in programs such as Australian Ninja Warrior, Bondi Rescue, Real Housewives of Melbourne, Deadly Women, Drunk History, Love Island Australia, Monster Croc Wrangler, One Born Every Minute and Territory Cops.

Before joining Melodie, Helsinger spent the a decade at Spirit Production Music overseeing broadcast licensing deals, as well as acquiring artist catalogs. Prior to that, Gary was a music executive at Universal and Chrysalis, where he discovered artists such as Tool, Linda Perry, Jeff Buckley and The Smashing Pumpkins, whom he signed to their first publishing deal. He was also one of the singers of the multi-platinum and Grammy nominated prop-rock band, Green Jellÿ.

Evan Buist, Founder & Managing Director of Melodie commented, “Gary brings decades of experience to this role, with a genuine passion for what we do. He has what can only be described as an encyclopedic knowledge of music, but his superpower is that he’s ridiculously likable. We couldn’t have found a better person to lead our sync business in the U.S.”

Gary Helsinger said, “I couldn’t be more excited to join the Melodie team, introducing this carefully-curated library of fresh tunes to the U.S. market. My lifelong obsession with all things Australian dovetails perfectly with this top notch catalog from both Australian and international artists. And as far as quality is concerned, Melodie has the best!”

Melodie’s exclusive one-stop library is available for both blanket and needle drop licenses, covering all media platforms worldwide, in perpetuity.

Melodie is a music licensing platform providing authentic, simply-licensed music for creators, businesses and creative platforms. Powered by AI search tools, and with an award-winning roster of artists, Melodie makes it fast, affordable and incredibly easy to find and license great music for any type of content.