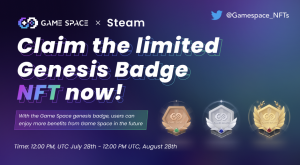 Game Space may launch new utilities for badge holders in the next phase, such as being whitelisted for future new game releases, eligibility to join subscription and invitation games, airdrop tokens, etc. At present, the official Game Space community has started the airdrop-related warm-up activities.


Game Space CEO Michael said that the most important reference factors for the NFT AirDrop for one billion Steam players are the user’s game time and account registration time. It is only for the attention and interests of real users on Steam to conduct AirDrop rewards, which is for Web2 players to enter the Web3 world and play GameFi games.

Game Space hopes to connect Steam with its GaaS platform and become the first stop for one billion gamers to enter the Web3 world. Gamers can freely switch between applications on multiple platforms, bringing the open Web3.0 world to every traditional gamer without zero barriers.

In addition, Game Space can also help any Gaming company to provide a full range of technical and business model support such as AirDrop marketing for traditional gamers. Through the SDK provided by Game Space, the development can allow game manufacturers’ games or APPs to have the same blockchain function as StepN in as little as 7 days, including embedded NFT Marketplace, Multi-chain deployment, and Mystery boxes, Auctions, AirDrops and other primary market distribution functions.