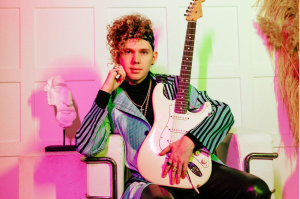 Canadian Native Yates’ Career Has Taken Off and He Is Back On Stage Ready To Show U.S. Fans What They’ve Been Missing

NEW YORK, NY, USA, July 29, 2022 /EINPresswire.com/ -- Singer/songwriter/multi-instrumentalist Francesco Yates has announced he will be joining ATCK (All The Cool Kids) on fifteen Backstreet Boys tour dates in the United States.

ATCK is a creative collaboration between A.J. Mclean (Backstreet Boys) and DJ Lux (Brandon Mashburn). Yates has also performed with ATCK several times in the past, as well as appearing on ATCK single releases including “Don’t Call Me Back” and “Hurts To Love You”.

The 26-year-old Toronto-based Yates began his professional career when he signed a major label record deal at the age of 16, propelling him into a worldwide spotlight. He is the recipient of platinum-selling plaques, more than a billion streams, and multiple other successes including performing on Robin Schulz’s 2015 global smash hit “Sugar” and serving as direct support on Justin Timberlake’s 2018/2019 Man of the Woods tour.

Buoyed by the influence of pop music royalty past and present, Yates’ latest single, “Jimi”, showcases his masterful evolution as he delivers one of his most confident and alluring vocal performances to date, along with his world-class musicianship and airtight pop songcraft. The track transports the listener with his modern take on up-tempo 90s R&B Pop with Funk-filled bass lines and a prominent guitar solo that Hendrix would surely approve of. “Jimi” can be found on Spotify along with the official music video on YouTube.

Fans interested in purchasing tickets to the show can do so by visiting the Backstreet Boys’ website at https://backstreetboys.com/events/.

About Francesco Yates:
The Toronto-based Francesco Yates has already garnered more than a billion streams and has amassed several platinum-selling plaques. A singer/songwriter/multi-instrumentalist, Yates is now touring with the Backstreet Boys across North America. At 16, Yates signed a major label record deal and was propelled into a worldwide spotlight. From releasing his self-titled debut EP in 2015, singing and playing guitar on Robin Schulz’s global smash hit “Sugar”, and has won the endorsement of heavyweights including Timberlake and Pharrell Williams, Yates’ musical journey has more than prepared him for this moment. Fans can check out more of Francesco Yates on Instagram and TikTok by following @FrancescoYates and going to his website www.francescoyates.com for more information.

About Backstreet Boys:
For 28 years the Backstreet Boys have delivered the finest pop music one has to offer, making them one of pop's most influential performers. With countless #1s hits, record-setting tours, numerous awards and worldwide sales in excess of 130 million, BSB has been recognized as the best-selling boy band in history. In early 2019, BSB released their GRAMMY nominated 10th studio album "DNA" on RCA Records. The album debuted at #1 and features the Top 10 hit "Don't Go Breaking My Heart." The critically acclaimed and chart topping single was nominated for the "Pop Duo / Group Performance" 2019 GRAMMY, and was BSB's first hit on the Billboard Hot 100 in 10 years. Upon its release, the single went straight to #1 on iTunes Top Songs and Global charts and charted in over 22 countries.