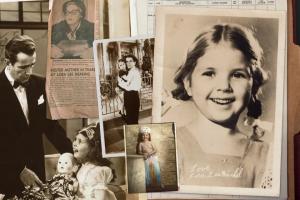 We are working toward some celebration of her life and all of her accomplishments at a young age. Lora Lee deserves that recognition.””
— Michel’s niece Leslie Hannah.
SCHULENBURG, TEXAS, UNITED STATES, July 18, 2022 /EINPresswire.com/ -- Lora Lee Michel, a talented and renowned 1940s child actress, has been missing since 1962, and with the help of LA Times Investigative Reporter Stacy Perman, her family has some of the closure they have been searching for more than 30 years.

“Our family knew all about Lora Lee Michel’s success and her fall from fame, but we always wanted to know what happened to her while the world seemed to forget,” Michel’s niece Leslie Hannah said. “My mother, Lora Lee’s biological sister Barbara Wright Isaacs, couldn’t keep a relationship with Lora Lee for a series of issues during their childhood and has been wondering ever since. After my years of research efforts, Stacy helped us to unlock the questions that have surrounded our family for years and brought us some sense of closure, even though it was difficult information for us to hear.”

At the height of her brief Hollywood career, Michel was considered the greatest child star since Shirley Temple starring in 13 films with actors that included luminaries such as Humphrey Bogart, Gary Cooper and Olivia de Havilland.

Michel’s life was filled with Hollywood stars, dysfunctional families, heartless press, unwieldy court systems and a corrupt entertainment industry. Michel’s family believed she was totally lost in time after she once again became orphaned at the age of 15 and served time in jail. Then, there was no record of her since 1962.

Perman was able to dive into public records, family interviews, and documentation more than 50 years old to discover what allegedly happened to Michel–or at least has come to a conclusion of what may have happened to her. During the time when her family believed her to be missing. According to one of Michel’s former husbands and further research from Perman, Michel may have died of cancer in 1979.

“With her talent, she could have been anything and anyone she wanted. In my heart, I guess I always hoped that she would have lived a life that would have been fulfilling and happy. We are working toward some celebration of her life and all of her accomplishments at a young age. Lora Lee deserves that recognition.” said Hannah.

For years, so much of Michel’s life remained a mystery to her sister Wright Isaacs and her daughters.

“I did not expect her life to be such a tragedy,” Isaacs said. “Maybe someday we’ll meet again in heaven. I’d like to believe that, but I don’t know now.”

To listen to part one of the Los Angeles Times’ podcast visit https://www.latimes.com/podcasts/story/2022-07-12/the-times-podcast-what-happened-to-lora-lee. For part two visit https://www.latimes.com/podcasts/story/2022-07-13/the-times-podcast-lora-lee-michel-fate. For more information about Lora Lee Michel’s story, being involved in the ongoing project, or if you have any information about Lora Lee Michel, please visit www.loraleemichel.com or email whereisloralee@gmail.com.