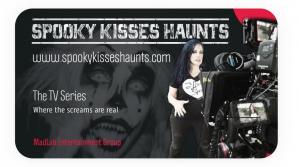 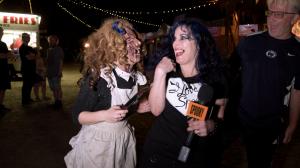 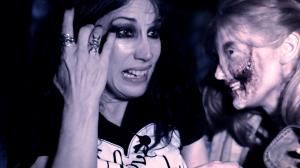 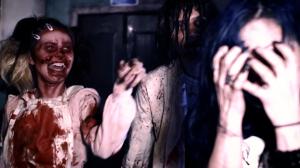 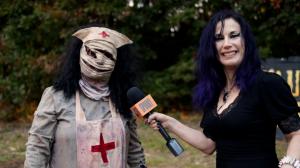 The show is called Spooky Kisses Haunts and is the brainchild of husband-and-wife duo, Rich Perry and Beverly Thomas.

Spooky Kisses Haunts is a new docu-reality TV show produced for broadcast and currently in pre-production for initial release in late 2023. The show, produced by MadLab Entertainment Group, is Halloween-focused and offers unique insights into the fascinating world of Halloween haunted attractions, along with behind-the-scenes interviews with staff and actors. Spooky Kisses Haunts is shot in a unique documentary/actuality format with an on-camera host/comedian, aka ‘Spooky Kisses.’

“In 2011/2012, both my wife (Beverly Thomas) and I were in other marriages and, sadly, both lost our spouses to cancer,” says Producer/Director of the show, Rich Perry. “After we met, began dating, and married two years later, we didn’t ever expect to get a second chance at love, let alone launch such an interesting business idea together. Producing Spooky Kisses Haunts has been one of the most amazing experiences we’ve had together and it’s a truly humbling feeling.”

“Meeting Rich completely changed my life, and I couldn’t be more excited for our ambitious project,” says Beverly, aka host of the show, ‘Spooky Kisses.’ “I always wanted to be a comedian and feel like I’m finally in my own element with this show - I’m having the time of my life! I love performing on stage and spent years studying dance, ballet, special effects, and TV makeup, so I have a deep appreciation for the artistry that scare actors bring to their craft. And, in case viewers are wondering, when we are filming at the haunts the screams are all real! I can’t tell you how terrified I become when the lights go out and I am walking through these creepy houses and structures alone. It scares the hell out of me, but I wouldn’t change it for the world.”

According to the multi-talented duo, though there have been several successful TV shows based on the Halloween Attractions (Haunt) industry before, they have always been fairly corporate (Travel Channel) and set up in a review style - some with off camera hosts, such as the America’s Top Ten Most Haunted Attractions.

“We are doing something very different,” Rich states. “We spend time with the owners, crew and scare actors and interview them get to know them in and out of character. Our job is simply to tell their stories in an engaging and entertaining way. Fortunately, our on-screen host, Spooky Kisses, has worked as a comedian before and the show is more humorous and amusing than scary, but it does provide a lot of detail about the props that are in use and the tools they use to scare people. The goal is to also brand Spooky Kisses and use her skills as a host and entertainer to keep people engaged in the show.”

“The size or success of the haunt/business is not necessarily a factor; it’s more about the people for us, the back story and personal narratives of owners and staff are more interesting and entertaining than props or theatrics - although we do need a good deal of those, too,” Beverly adds. “Part of our objective is to expose your haunt and the haunt industry at large to a much wider audience and increase the haunts’ overall market base.”

Currently, four full episodes of Spooky Kisses Haunts have already been filmed with another ten scheduled to be shot across the United States in the fall. Today, the Spooky Kisses Haunts team is working hard to secure multiple worldwide distribution deals and is targeting the first broadcast/cable/streaming release next year.

For more information about Spooky Kisses Haunts, or to contact the team for an interview, please visit https://spookykisseshaunts.com/.

MadLab Entertainment Group was founded by Producer, Rich Perry, who is the creator of Two Wheels 2 Anywhere, a TV travel show for bikers, and Master Mind Audio, LLC, a production sound company that specialized in media duplication, digital mastering, and CD-ROM/DVD authoring/replication to independent record labels and studios in the greater Boston area.