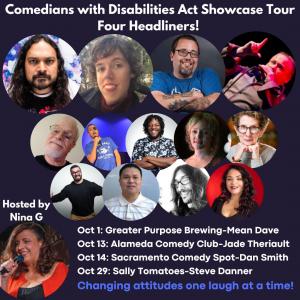 The tour is meant to bring authentic and traditionally unheard voices to the forefront.

OAKLAND, CALIFORNIA, UNITED STATES, July 28, 2022 /EINPresswire.com/ -- The founders and contributors of the Comedians with Disabilities Act are pleased to announce the upcoming tour of its wildly popular show in October 2022.

The Comedians with Disabilities Act is a fabulous collection of comedians with disabilities, both seen and unseen, who bring forth the humor they find in their experiences. The comedy troupe is the brainchild of comedian Michael O’Connell, who started the group in 2010, and was later joined by Steve Danner and Nina G not long after. In 2016, O’Connell sadly passed away - but the show he created lives on, spotlighting a variety of Disabled and outrageously funny comedians. The upcoming lineup of shows includes disability representation from the following experiences: stuttering, dyslexia, Dwarfism, amputation, addiction recovery, OCD, depression, anxiety, PTSD, Autism, Tourette’s syndrome, spina bifida, spinal muscular atrophy, multiple exostoses, hearing loss, cerebral palsy, epilepsy, and blindness.

In the troupe’s most recent news, the Comedians with Disabilities Act is announcing it will be touring Northern California, featuring four headliners across 4 different venues - just in time for the Disability Awareness Month of October.

Author and Disability advocate Nina G, who has been with the Comedians with Disabilities Act since 2011, will host all four shows. She comments, “There is a lot of talk about representation of Disabled actors, writers, and artists, yet the images we see on TV and film are sparse. It is important that audiences and comedy producers see Disabled comedians spotlighted and, hopefully, they will see that we are hilarious and can sell out a show.”

San Francisco Bay Area favorite at local clubs, Mean Dave, will headline Santa Cruz’s Greater Purpose Brewing. Dave is in his 8th year of recovery from addiction, which he ingeniously weaves into his humor. “Not a lot of people know that being an addict in recovery is covered under the Americans with Disabilities Act,” Mean Dave advocates.

Jade Theriault has performed multiple times with the Comedians with Disabilities Act and always brings down the house. As someone with Spinal Muscular Atrophy, Jade uses a wheelchair, but that experience isn’t the only topic she jokes about. “We came a long way from crawling up steps and hiding away in homes. I do think the mainstream is ready for Disabled comedy. We’re too loud for the microphones.” Jade adds, “I’m stoked to headline Alameda’s wheelchair accessible stage on October 13.”

Dan Smith, who headlines the Sacramento Comedy Spot on October 14, sums up why he and so many others on this tour are excited. “Getting to share a stage and headline a show of comedians that represent the humor and the diversity of people in the disability community is the culmination of my comedy career to date. I can NOT wait for this show!”

"We're all comedians first," said Napa native and Sally Tomatoes’ headliner on October 29, Steve Danner, who identifies as a Little Person and is one of the show’s original founders. "But who says you can't make people laugh and send them home with something to think about too? While our first goal is to have fun and joke around, we also want to send a strong message that, even with a disability, we can reach our goals."

In addition to being a comedian, Nina G is also a college and corporate speaker and author of three books. Her memoir, Stutterer Interrupted: The Comedian Who Almost Didn’t Happen, was released to critical acclaim in 2019 and is about realizing her lifelong comedy dream while overcoming internalized stigma. In February 2022, she launched her new book co-authored by OJ Patterson, Bay Area Stand-Up Comedy: A Humorous History. Nina has performed all over the United States and appeared on many daytime TV talk shows, NPR broadcasts, and podcasts.

Steve Danner's comedy career began as an audience member at a comedy club. That night, the comedian on stage started riffing with him and after Danner showcased his own riffing skills, the comic approached Danner after the show and suggested he give comedy a try. He soon began a career as a comedian and producer and has opened for many headliners such as Last Comic Standing Winner Felipe Esparza.

Comedian Mean Dave has opened for many notable comedians like Josh Blue, Big Jay Oakerson, and Jay Mohr, and has performed at colleges across the US. Mean Dave’s role in the Comedians with Disabilities Act helps to bring his critical message about addiction and disabilities to audiences around the world.

Jade Theriault is renowned in the comedy community and has been on SF Sketchfest, The Art of Female Comedy Festival (Wichita, KS), Palm Springs International Comedy Festival, and the Westside Comedy Festival in Santa Monica where they were honored for Best Joke of the Night. Jade also starred in Malic Almaya's "RUN!" (2018) and was on an episode of MTV Decoded.

Dan Smith (aka Dan the Can’t Stand Up Comedian) is a Sacramento based comedian who plays clubs throughout California and Nevada including the Sacramento Punch Line and San Francisco’s Cobb’s Comedy Club. He has been a wheelchair user his entire life and much of his comedy comes from his everyday experiences on wheels!