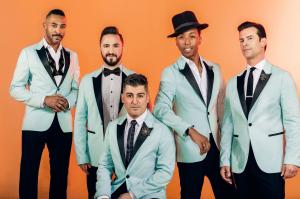 RIVERHEAD, NEW YORK, UNITED STATES, July 11, 2022 /EINPresswire.com/ -- “The Doo Wop Project,” pays tribute to the Doo Wop and Motown music of the 20th century. The performance features favorite Broadway stars playing at the Suffolk Theater in Riverhead, New York on July 16th. The performance includes some of the greatest hits from The Temptations and The Four Seasons along with “DooWopified” versions of modern classics from Maroon 5, Jason Mraz, and more.

The Doo-Wop project features stars from the Broadway hits Jersey Boys, Motown: The Musical, and A Bronx Tale. The Doo Wop Project brings unparalleled authenticity of sound and vocal excellence to recreate—and in some cases entirely reimagine—the greatest music in American pop and rock history.

The Suffolk Theater shines on Riverhead’s Mainstreet as a state-of-the-art performing arts center for every kind of performance. The Summer Tour for the Doo Wop project will be kicked off at 8:00 PM on July 16th at the Suffolk Theater.

The Doo Wop Project recently gained national attention with the PBS, special, The Doo Wop Project, which traces the evolution of Doo Wop from the classic sound of five guys singing tight harmonies on a street corner to the biggest hits of today in this concert special filmed before a live audience. The PBS special has amassed thousands of viewers throughout its time on the network, with the special continuing into later 2022. Tickets are available at the Suffolk Theater website: