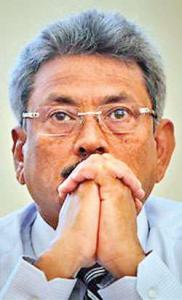 The Transnational Government of Tamil Eelam (TGTE)* urged Singapore Government to arrest former Sri Lankan President Gothabaya Rajapakse under Universal Jurisdiction for the mass killing of Tamils and raping of hundreds of Tamil women and girls.

Former Sri Lankan President Gothabaya Rajapakse fled his country after massive protests and now in Singapore. Several rallies outside Singapore Embassies calling for the arrest of Gothabaya are organized in Malaysia, India, UK, USA, Canada and other places.

According to UN between 40 and 70 thousand Tamils were killed in six months during Gothabaya's time as defense secretary. Hundreds of Tamil women and girls were raped, and thousands of Tamils, including babies & children, disappeared during his time.
** Video: Sri Lanka’s Killing Fields: https://www.youtube.com/watch?v=3aBLl_M3z40

Nearly 12 years after the end of the civil war in Sri Lanka, there is still no accountability for grave crimes that according to UN constitute war crimes and crimes against humanity, UN High-Commissioner for Human Rights Michelle Bachelet told the United Nations Human Rights Council on February 24 that UN had failed to live up to its prevention role in Sri Lanka.

"She reiterated her previous calls to member states to "investigate and prosecute" perpetrators of human rights abuses in Sri Lanka "in their jurisdictions, under accepted principles of extraterritorial or Universal Jurisdiction."

"The principle of universal jurisdiction provides for a state’s jurisdiction over crimes against international law even when the crimes did not occur on that state's territory, and neither the victim nor perpetrator is a national of that state. The principle allows national courts in third countries to address international crimes occurring abroad, to hold perpetrators criminally liable, and to prevent impunity."

Sri Lanka’s civil war lasted some 25 years, pitting the majority Sinhalese against Tamils. The conflict ended with a massive assault in 2009, in which tens of thousands of Tamil civilians were killed and hundreds of Tamil women & girls were raped. Current president Gotabaya Rajapaksa, who was defence chief at the time, is widely seen as the man who ordered the final assault.

Tamils in the island of Sri Lanka faced repeated mass killings in 1958, 1977, and 1983 and the mass killings in 2009 prompted UN Secretary General Ban Ki-moon to appoint a Panel of Experts to report on the scale of the killings.

According to UN internal review report on Sri Lanka, over 70 thousand Tamils were killed in six months in early 2009 and Tamil women were sexually assaulted and raped by the Sri Lankan Security forces.

International Truth and Justice Project (ITJP) in February 2017 handed over details to UN of Sri Lankan Military run "Rape Camps", where Tamil women are being held as “sex slaves”. Also, according to UK Foreign and Commonwealth Office report on April 2013, there are over 90 thousand Tamil war widows in Sri Lanka.

Thousands of Tamils disappeared, including babies and children. UN Working Group on Enforced Disappearances stated in 2020 that the second highest number of enforced disappearance cases in the world is from Sri Lanka.

According to this UN report, the killings and other abuses that took place amount to war crimes and crimes against humanity. Independent experts believe that there are elements of these abuses that constitute an act of genocide.

Members of the Sri Lankan security forces are almost exclusively from the Sinhalese community and the victims are all from the Tamil community.


*ABOUT THE TRANSNATIONAL GOVERNMENT OF TAMIL EELAM (TGTE):

The Transnational Government of Tamil Eelam (TGTE) is a democratically elected Government of over a million strong Tamils (from the island of Sri Lanka) living in several countries around the world.

TGTE was formed after the mass killing of Tamils by the Sri Lankan Government in 2009.

TGTE thrice held internationally supervised elections among Tamils around the world to elect 135 Members of Parliament. It has two chambers of Parliament: The House of Representatives and the Senate and also a Cabinet.

TGTE is leading a campaign to realize the political aspirations of Tamils through peaceful, democratic, and diplomatic means and its Constitution mandates that it should realize its political objectives only through peaceful means. It’s based on the principles of nationhood, homeland and self-determination.

TGTE seeks that the international community hold the perpetrators of war crimes, crimes against humanity, and genocide against the Tamil people to account. TGTE calls for a referendum to decide the political future of Tamils.

The Prime Minister of TGTE is Mr. Visuvanathan Rudrakumaran, a New York based lawyer.