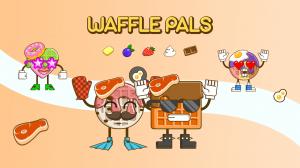 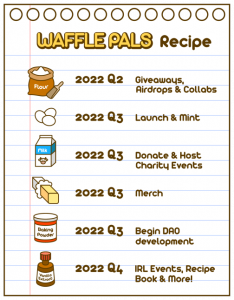 HOUSTON, TEXAS, UNITED STATES, June 20, 2022 /EINPresswire.com/ -- Waffle Pals are making their way toward the ever-expanding NFT market with a unique collection in the form of 8,888 crispy waffles. These fluffy and cute characters live on the Ethereum blockchain (ERC-721) and are just the first part of the Waffle Pals team’s ambitious dream to deliver never-ending value to its community. The Waffle Pals team’s founders are doxxed and believe the NFT market deserves the utmost transparency in web3.

The Waffle Pals Community will be able to purchase these warm and crispy creations sometime around late summer to early fall. Additionally, all pals will enjoy the full copyright benefits of their NFT! Creator royalties are kept low at just 2.5%, with 1.5% being used to maintain community operations and marketing, and the other 1% allocated to a charity as determined by the Waffle Pals Community. To advance their charitable efforts, the Waffle Pals will together decide the beneficiary of a 5 Ethereum donation after mint. Pals can also expect perks such as IRL events, collaborative merchandise, an official recipe book, the Waffle Pals Loot Box, and more!

The Waffle Pals team is optimistic about the NFT boom and believes that this technology bridges gaps between artists/companies and the consumer. The Waffle Pals are artistic delights resulting from decades of experience by its Lead Artist, GIMO. Each Waffle Pal is algorithmically generated with traits consisting of flavor, shape, syrup, a delicious topping, and more!

The Waffle Pals are inspired by their founders’ desire to relieve global food shortages. Through building a community that values that same goal, the world can finally see more of what web3 is really made of. The Waffle Pals Team believes that NFTs are an opportunity for brands and their consumers to decide together the fate of a company and that combining this passion with an accountable system that benefits those in need makes for a wholesome product experience. While it is exciting to think about the distant future of web3, The Waffle Pals Team recognizes that the core community and first mint are key to the success of this mission.

The Waffle Pals Team has devised the following recipe (a.k.a. roadmap) to define its initial goals:

The Waffle Pals Genesis Mint will utilize a custom smart contract and a minting site, however, the site address is kept confidential ahead of time for safety purposes. There will be an audit of the smart contract ahead of time by a reputable firm to ensure the integrity of everyone’s purchase. Details of the audit firm at TBD.

Waffle Pals is an NFT Project of 8,888 warm and crispy waffles based on the Ethereum blockchain. Their motto is feeding and entertaining the world, and their goal is to ease the hunger of a world afflicted with food shortages, one crispy waffle at a time.