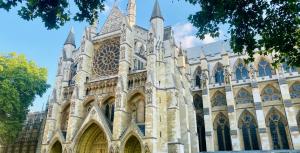 LONDON, UNITED KINGDOM, June 16, 2022 /EINPresswire.com/ -- Founded in 960AD, Westminster Abbey has been the coronation church of every English and British monarch since 1066. It is also the final resting place of thousands of people of prominence in British history. At least 17 monarchs, eight prime ministers, and many poet laureates, actors, scientists, military leaders, as well as the Unknown Warrior, are buried here. The iconic church we see today was begun by Henry III in 1245 and is one of the most important buildings of the Gothic style in the UK. At the same time, to this day, the Abbey also retains the tradition of Christian worship and welcome.

Being such an important historic landmark, Westminster Abbey operates an ecommerce website to help deliver information, encourage visits, and sell tickets, gifts and products. Up to this point, this ecommerce website had been running on Magento 2. However, the Westminster Abbey team found it to be complicated and not without issue - for example integrations being very manual, no stock management facility, and sales on Magento not being put through the online till.

Having considered a new ecommerce platform to move forward with, Westminster Abbey Enterprise Limited (WAEL - the commercial wing of Westminster Abbey), has committed to working with Un.titled to migrate over to BigCommerce.

After auditing against a number of ecommerce platforms, we recommended BigCommerce. Due to features such as multi-currency, BigCommerce was already on the WAEL’s radar.

We’ve already carried out an initial phase of Discovery work. This was run as a standalone piece, and ultimately helped both Un.titled and Westminster Abbey, gain greater clarity and a detailed project specification for the project. Areas the Discovery work covered included platform configuration, third party services, module and widget choices as well as theme selection. Run by the Un.titled ecommerce consultancy team, in close collaboration with the Westminster team, the work also drew on the insight and expertise of Un.titled’s design and UX team.

The next phase of the project will see our team start to build a new ecommerce site aimed at delivering a more effective and efficient offering for WAEL, using BigCommerce.

“We are really excited about working with an institution with the history and sense of place such that Westminster Abbey has,” said Brian Healy, Head of Agency at Un.titled. “With some of the delays caused by the pandemic now behind us, we can’t wait to get moving with this project and deliver a superb ecommerce site for this towering icon of British identity.”

Akash and Trapperx Team Up…

NFT Launch Based on RAD’s…