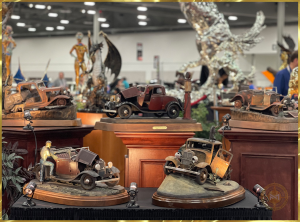 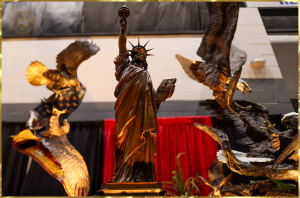 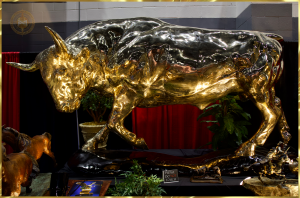 Lorenzo's Bull by Lorenzo Ghiglieri is a 10 foot sculpture cast in bronze and mirror finished, on display at the Palm Beach Barrett Jackson Event in 2022

BATTLE GROUND, WASHINGTON, UNITED STATES, June 13, 2022 /EINPresswire.com/ -- Treasure Investments Corporation (TIC) dba Foundry Michelangelo has been sponsoring and attending Barrett Jackson's events for years; the 50th annual conference in Scottsdale and Palm beach were wildly successful for this fine art company. With over $1 million in sales on the floor at the Scottsdale event, Treasure Investments projects similar numbers at the upcoming show in Las Vegas, June 30th to July 3rd.

Specializing in Bronze and Precious metals sculpture, TIC has made a name for itself offering artwork with a vast array of subject matter to include whimsical, historic, fantasy, wildlife, patriotic, and contemporary style works.
While breaking ground in a new market can be daunting, it can also be greatly rewarding for niche companies. Treasure Investments, arguably the best source for fine art sculpture in the world, has partnered with Barrett Jackson - and it could not be a better fit. From the smallest desktop images to monuments for the entry of your place of business or estate, TIC has you covered.