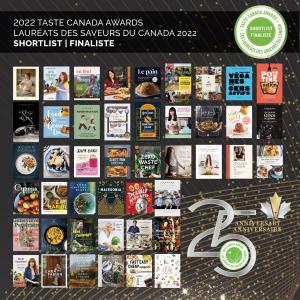 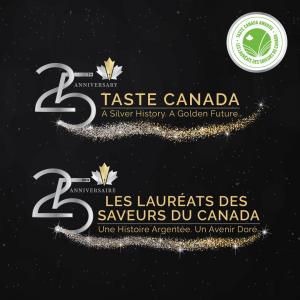 Twenty-five years of vision, drive and shared passion culminating as we celebrate Canada's best cookbooks and their talented authors.”
— Karen Baxter
TORONTO, ONTARIO, CANADA, June 15, 2022/EINPresswire.com/ -- Over the past 25 years, Taste Canada has promoted vibrant and diverse culinary books that have been brought to life in households across the nation. As we look back and celebrate the countless people who have contributed to the organization and allowed it to get to where it is today, we look forward to the next 25 years, and a future that is definitely golden.

"We mark this anniversary year, a significant stage in the continued development of the ONE AND ONLY Canadian cookbook awards in our country. Twenty-five years of vision, drive and shared passion culminating as we celebrate Canada's best cookbooks and their talented authors. Our collective cultural identity in the culinary realm is of significant importance.” said Karen Baxter, Director, Taste Canada. “These celebrated books lead us to look back into our culinary roots and influences and prepare us in anticipation for what's to come by way of new inspirations, trends, environmental stewardship, and shared enthusiasm for all things related to food."

The Taste Canada Awards have been presented to some of the best cookbook authors in both official languages for a quarter-century. The jury is comprised of volunteers from Canada's culinary profession, appointed by an independent selection committee.

Becoming Sugar-Free: How to Break Up with Inflammatory Sugars and Embrace a Naturally Sweet Life by Julie Daniluk, Penguin Canada, Toronto
***
Live Well Collection: Recipes, Food Stories and Culinary Tips to Help You Thrive! by Shauna Versloot, Hamaka, Vancouver
***
The Food Doula Cookbook: A Guide to a Healthy Pregnancy and a Nourished New Mom by Lindsay Taylor, Plumleaf Press, Oakville

The full shortlist can be found at: https://tastecanada.org/

Taste Canada is a not-for-profit organization that remains sustainable due to the generous support and sponsorship received from industry partners and the Canada Book Fund.

Interviews with Karen Baxter, Executive Director, shortlisted authors, or ambassadors can be facilitated. Contact Steven Hellmann from The Foodies Group, Taste Canada Publicist, at steven.hellmann@thefoodiesgroup.com with any requests.