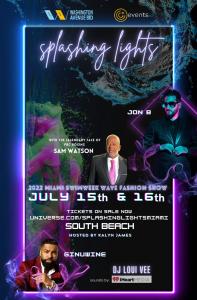 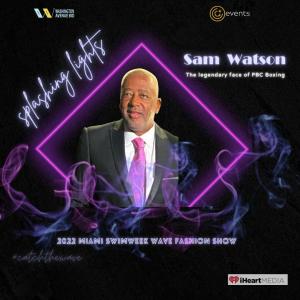 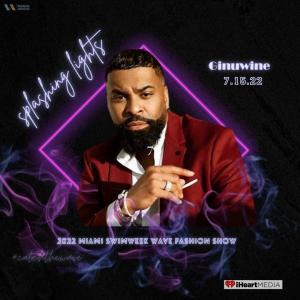 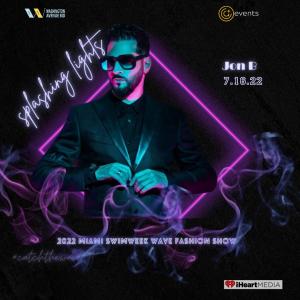 Watson, a long-time friend and right hand of boxing promotions giant, Al Haymon, has ascended to his own legendary status, with a track record of years of success and a stable of 300 prized fighters. As a kid, Watson was a fan of Muhammad Ali, and later, his friend. The opportunity to return to where it all began for Ali was one that he could not pass up.

“I love working with fighters, it’s what we do,” Watson said. “I looked up to Ali because he inspired me, and now, it’s my opportunity to inspire the next generation of fighters.”

Watson returns to Miami Beach as himself, the legend, at what promises to be a star-studded event and the new highlight of Miami Swim Week 2022. This year’s annual WAVE fashion show is an outdoor, two-day event featuring chart-topping talent in Ginuwine and Jon B, respectively.

The full list of designers has yet to be released, but so far, MuurSwagg, House of Athlete, Novados Swim, and, new line, Shugakane Swim have made the cut to show on the 100-ft runway.

“When we got the call about Mr. Watson joining us, we knew Splashing Lights had arrived,” said Ailene Torres, Chief Strategist at A Plus Event Production Co. Inc. “We are turning Swim Week on its head and the right people are noticing.”

Now, that Watson has publicly committed, NFL All Pro and Super Bowl Champion, Bryant McKinnie, has signed on to attend as Watson is scheduled to appear on his iHeartMedia podcast, Mac and Meeka. Each day more celebrities confirm their attendance including MLB great Barry Larkin, his NBA player son, Shane, and pro golfer, Miko Page.

Watson’s appearance will help the WAVE BID achieve its goal of getting the maximum exposure for the designers.

“It is about helping them reach as many people as possible,” said WAVE BID Executive Director, Troy E. Wright. “Mr. Watson’s presence at Splashing Lights is the one-two punch we needed. The first hit is the jolt of energy he will bring to the Avenue and its rich boxing history, the second is the light we want to shine on the designers in the show.”

AILENE TORRES
A Plus Events
email us here