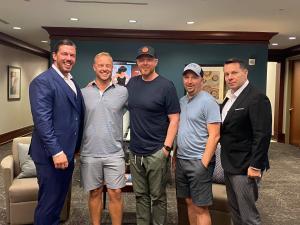 If you owe money, inflation is a very good thing. If people owe you money, inflation is a bad thing.”
— Allan Roth, an accountant at Wealth Logic
CHICAGO, IL, UNITED STATES, June 9, 2022 /EINPresswire.com/ -- Replace Your University has seen their strategy catch on during the past 7 years but is currently seeing a reaction to their content that has never happened before. Two weeks ago they contributed to an article to help homeowners save on their existing mortgage by following a few easy to implement strategies. Shortly after the article was published it has caught on fire on the internet with people excited about the possibilities in the current market.

Replace Your Mortgage started in 2014 when Michael Lush used an ingenious strategy to accelerate the payoff of his mortgage in 3.5 years, resulting in eventually sharing the strategy with others by publishing a book called “Replace Your Mortgage”. Since then, Replace Your Mortgage has grown at an exponential pace largely due to the incredible success clients consistently achieve. With most clients being referrals from previous clients, it is clear this strategy is effective. Recently RYU was recognized as one of the Top 3 movers and shakers in the financial education industry.

The company's results have been exemplary since 2014, and freely offered up 3 simple ways to save on home ownership that can result in a significant impact to the majority of homeowners in the United States. Since being published, the article has received thousands of engagements and has been shared across the internet and social media platforms. Many comments on social media are thankful for any help as people feel pressure financially and are becoming increasingly concerned about the effects of inflation.

One of the reasons many homeowners are on the edge is because of the recent surge of inflation, and the overall increase of not just the value of their homes (up by more than 20.0% over the last year) but also the increase in costs across the board along with the need to maximize revenue coming in so households can keep up with rapidly rising costs.

Inflationary environments often lead to a mixture of results and unexpected consequences. It has been roughly 40 years since the last major inflationary period, and many are not sure what to expect. Recently Allan Roth, an accountant at Wealth Logic, had this to say in CNBC, “If you owe money, inflation is a very good thing. If people owe you money, inflation is a bad thing.”

Replace Your University has built a solid record of performance by helping clients learn about multiple wealth creation and preservation strategies. In addition, they appear to be helping homeowners (at no cost) save right now through their free content and helping homeowners during a transition that is likely to impact many in the country financially.