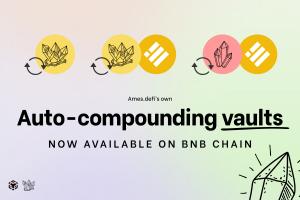 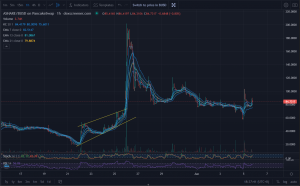 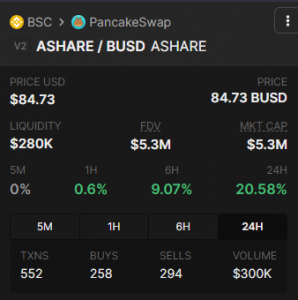 LONDON, ENGLAND, June 9, 2022 /EINPresswire.com/ -- Ames Protocol: The New Algorithmic Stablecoin Ecosystem
Pegged to the well known stablecoin $BUSD, which is fully collateralized and audited monthly, the Ames.Defi protocol is a new algorithmic stablecoin ecosystem. The protocol specifically aims to create a high yield generating protocol, with above average annual percentage rates (APRs), while contributing to a bigger ecosystem by increasing $BUSD liquidity on BNB Chain. To accomplish this, the protocol has 3 distinct tokens that each play a critical role in the function of the project.

The PegToken, named Ames.defi Tokens or $AMES for short, acts as a medium for $BUSD exchange. The protocol’s specifically designed stability mechanism works to maintain $AMES peg value of 1 $BUSD.
Ames.defi Shares, also known as $ASHARE, establishes both governance voting and ownership rights of the protocol. Once DAO is established, the token will play a crucial role in the governance of Ames.defi. $ASHARE can be staked in the boardroom which is the AMES mint strategy of Ames.defi which distributes $AMES to all stakers when it's above peg. The boardroom distributes rewards and can provide up to 800% APR.

The last token, Ames.defi Bonds ($ABOND), was designed to help incentivize and reward users for ensuring peg during a contractionary period. Since launch, the Ames protocol has proven to not only be functioning but also prospering as the project is well on its way to becoming a mirrored, liquid asset to $BUSD.

How the Ames Protocol Works
The protocol has an integrate Nodes system which acts as a purchased AMES rewards system with a 1.5-3% daily deliverance of passive yield.Currently the projects has approximately $500k total value locked in our nodes system, roughly 25% of the projects total value, that is technically out of circulation allowing it’s holders to gain rewards and reduce market sell pressure on $AMES. To stay at its pegged value, Ames.defi protocol uses a series of complex interactions based on monetary price mechanisms. When the Ames price is over the peg, new PegToken are minted to drive the price down. These new PegToken are allocated to $ASHARE holders in the boardroom, thus incentivizing the staking of $ASHARE. When Ames price is at the peg, Ames holders can use the Ames-BUSD LP to increase their yield. At this point, each investor's $ASHARE will drive voting rights to have a say in the governance of the platform through DAO. When Ames price drops below the peg, investor's are incentivized to buy ABOND using Ames. The PegToken used to buy $ABOND will be burned, which reduces supply of PegToken and brings its price back to peg, at which point investors can sell $ABOND to earn profit. The project further increases buy pressure on $AMES through their in-house autocompounder which automatically collects and re-invest rewards holders receive when they deposit their funds into a liquidity pool.

The Current Numbers
The Ames core team consistently inspect and provide charts comparing the value of $AMES to $BUSD and the value of $ASHARE to $BUSD to analyze the health of the tokens and overall ecosystem. Currently, the team has observed a notable trading volume in which approximately 13% of the $AMES/$BUSD pool and 53% of the $ASHARE/$BUSD pool are being traded daily.

$ASHARE/$BUSD chart provided by the Ames.DeFi team
The project hasn’t been without its bumps, the $AMES token was originally pegged to $UST, however, when $UST crashed, the project had to quickly and efficiently switch to $BUSD. Their quick ability to adapt to the circumstances allowed the peg token to increase from $0.15 to $1 within an hour. The Ames.defi community is also known for being motivated and fortified, with the strongest holders not only making smart moves to increase profit, but also withdrawing responsible amounts to help keep the project sustainable.

The project has been long praised for their solid and competitive annual percentage rates who consistently give a daily yield of 1-3%. Recently, $ASHARE increased tenfold from $18 to $200. Now sitting at 75 USD, their share token is considered to be extremely undervalued and is expected to soon exponentially increase. In a recent statement, Jules Kang, the CFO of Ames-Aalto Defi’s, commented, “For a tomb fork pegged to a stablecoin, this is like the dream way to farm passive income in a bear market.”