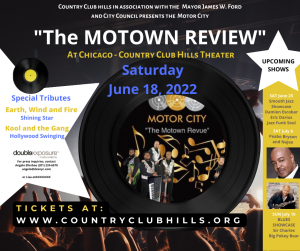 The Motor City “Motown Revue” tribute troupe will perform classics from the sounds of Detroit. Hits made popular by the Temptations, Four Tops, Smokey Robinson & the Miracles, Marvin Gaye, Diana Ross & the Supremes, Martha Reeves & the Vandellas as well as Tammi Terrell will be performed that evening.

Shining Star pays tribute to the music of Grammy Hall of Fame’s Earth Wind & Fire and their singalong classic hits. “September”, “That’s The Way of The World”, “Boogie Wonderland” and the #1 hit this tribute band is named after, "Shining Star”. Fully dressed in the type of wardrobes worn by the original Earth Wind & Fire, Shining Star will indeed shine as bright as can be as they take to the stage.

Mayor James W. Ford of Country Club Hills, IL, states the city is ready to bring to audiences many great nights of music, especially after dealing with the pandemic within the past two years – “COVID-19 may have stopped many live shows for a while but with precautions in place in cities, we’re ready to present to you a great lineup of artists from the worlds of smooth jazz, blues, funk, and classic soul!”

Portions of the proceeds from the concerts will benefit the Infinite Scholars Program - which provides all students, especially low income, and first-generation high school students of diversity, with the access to the resources, guidance, and funding necessary to successfully further their studies at accredited institutions of higher education.