Latest News
Home /Blog/Flames Of Durga Rising from the Ashes 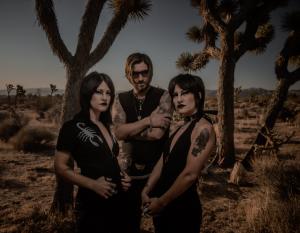 LOS ANGELES, CALIFORNIA, UNITED STATES, June 10, 2022 /EINPresswire.com/ -- Flames Of Durga is the brainchild of twin sisters Béah and Cecilia Romero who were born and bred in Los Angeles. They grew up writing songs together, craving to share their music with the world. It wasn't until a shared near-death experience acted as their catalyst to start a band. They chose to honor "Durga", who is a Hindu fire goddess that embodies fierce, feminine energy. Joining forces with their hard hitting drummer, Nate Million, they've become a strong, electrifying, fiery force.

‘White Owl' is Flames Of Durga's newest single off their upcoming debut album, described by the band as ‘a sludgy stoner rocker'. 'White Owl' was originally inspired by a lucid dream bassist and singer Cecilia had. This new single brings a heavy driven riff that has powerful energy with some witchy, mystical vibes. This marks the second single from their upcoming album, set for release later this year.

Flames Of Durga have been working hard on putting together their self-titled, debut full length album recorded at the world renowned music studio, Rancho De La Luna in Joshua Tree, CA. Produced by legendary musician, Dave Catching, (Queens Of The Stone Age, Eagles Of Death Metal, Mojave Lords, Earthlings?). "White Owl" is the second single off of their upcoming LP, which will be released later this year. An exclusive limited vinyl release will be out first in late August on Last Hurrah Records.

White Owl is out everywhere June 10th with a music video to follow June 17th. Be sure to follow Flames Of Durga on socials to keep up with tour dates, behind the scenes content and new music, videos and more on their website!